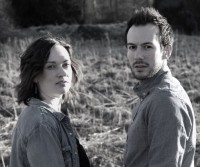 THE HUSBAND and wife duo based in Stockholm, Narrow Skies, who also record under the name Salt Of The Sound, have released a new EP. 'In Hibernation' is the third in a series of four seasons-inspired EPs and is described as "organic soundscapes combine with electronic elements to evoke images of the natural world - from shimmering lakes to the hidden depths of the forest, and the extremes of winter's icy grasp to the land of the midnight sun."