Natasha Bedingfield speaks about her 2004 hit "These Words" 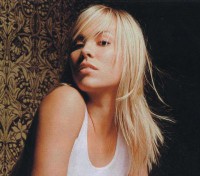 IN THE LATEST issue of UK trade magazine Music Week in their regular spread Hitmakers: The World's Greatest Songs By The People Who Made Them, Natasha Bedingfield is featured talking about her 2004 hit "These Words". After signing with small label Phonogenic, founded by songwriters Steve Kipner and Andrew Frampton, Natasha endeavoured to write a song with the duo. She said, "One of the things I remember about 'These Words' is we had written an amazing verse and we were trying to write the chorus. . . then we got stuck. It's funny because it's about writer's block and trying to say 'I love you' in a really unique way. One of the songwriters was like, 'I love you like a river that goes out into the sea' and was trying to be super-poetic. I was like, 'No, that isn't really ringing true.' As a joke I said, 'I just want to say, I love you, I love you, I love you.' Honestly, it was a joke but they were like, 'That's it!'" Natasha's latest album 'Roll With Me' is out now.