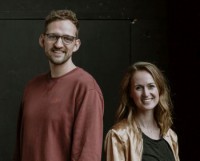 THE 22ND March will see the global release of 'Motions Of Mercy', the debut album by Luke + Anna Hellebronth, who lead the Worship Central resource and training platform based at St Luke's Gas Street church in Birmingham. Produced by Jimmy James, the album features songs co-written with Matt Maher, Nick Herbert, Josh Gauton, Ben Cantelon, Brenton Brown, Eby Corydon, Jonas Myrin and St Luke's Gas Street lead pastor Tim Hughes. Said Anna Hellebronth, "Songs such as 'All For Love (Gethsemane)', a picture of Christ's sacrifice, and 'Arrow', inspired by the writings of 14th century theologian Nicholas Kabasilas (The Life In Christ), continue to explore the topic [of the depth and cost of the love of God]. We are overwhelmed and yet deeply affronted by the love of God. It bears truth, which can pierce our hearts, while giving us freedom. God's love challenges every fibre of our 'humanness'. . . it leaves its mark."