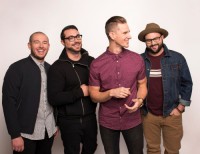 TULSA, Oklahoma-based pop group Stars Go Dim have released a cover of the single "Never Enough" from the film The Greatest Showman. It follows numerous releases by Stars Go Dim (aka Chris Cleveland) this year, such as "Heaven On Earth", "I Look To You (ftg Social Club Misfits)" and "You Know Me Better".