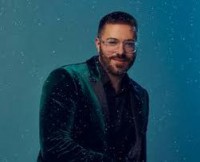 CCM STAR Danny Gokey has revealed in a new short film details of the debilitating fear that threatened his entrance into music. The White Chair Film series has in the past featured inspiring stories from such musicians as Korn's Brian 'Head' Welch and country artist Josh Turner. In the Gokey film, the singer explains how he has had a constant battle with fear since he was a young child. This fear was only propelled by the death of his wife Sophia, four years into their marriage. Yet, it was the tragedy of Sophia's death that led Gokey to audition for American Idol, a promise he had made to his late wife. But as he progressed through the audition process, the deep fear he had fought since childhood grew. "When I finally made it to the top 50, I literally looked at God and said, 'I don't know what's going on here, but I do not want to go on this TV show. I'm a mess, and I'm going to look like a mess in front of all these people,'" Gokey said. In the White Chair film, Gokey shares how he overcame his fear, which led him to not only placing third in the competition but also inspiring millions of viewers with his and Sophia's story.