"I Am Praying For You" single by Desmond Pringle released 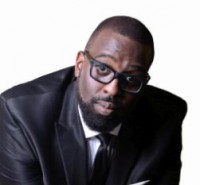 SOUTH CAROLINA-based gospel singer Desmond Pringle, who has released several albums and worked with such figures as Yolanda Adams and R Kelly, has released a single, "I Am Praying For You", produced by Grammy-winning Cedric Thompson. Pringle has recently completed a prayer clinic, linked to the National Day Of Prayer, in his hometown of Charleston, South Carolina. Speaking about prayer, Pringle said, "In this season, my attention and affection is being drawn to prayer, being engaged in it and coming to a greater understanding of it. The Prayer Seminar was so much more than an event or occasion, it was a starting point for this space and time of being serious-minded and sincere about prayer and praying. As God speaks to us through our daily realities, I believe he wants to hear from us. Its a call to draw near and to come closer to him. The saints of old were on to something, if ever we needed the Lord, we need HIM NOW, and we can have access to him through prayer. God will rally to our call and cry, if we would come together and pray."