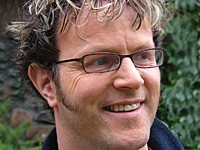 Rob Lacey, 43, father, actor and award-winning author, lost his courageous battle with cancer this week on Monday 1st May. He is survived by his wife, Sandra Harnisch-Lacey, and his two young children, Lukas and Magdalena.

Lacey is best known for the word on the street (originally published as the street bible), a vivid retelling of the entire Bible in modern British street English which was honored with the Book of the Year award in 2004 by the Christian Booksellers Convention in the U.K. Additionally, Borders named the word on the street to its 2004 list of best books in Religion and Spirituality. During the writing of the book in 2000, Rob was diagnosed a second time with advanced bladder cancer. He wrote the paraphrase of the book of Job for the word on the street while in the midst of agonizing cancer treatments. Miraculously, in 2002, his cancer went into remission but unfortunately resurfaced late last year.

"Rob's innovative approach and contagious energy, both through his books and his performance art, engaged a new generation, providing a fresh experience with God's Word," said Doug Lockhart, Zondervan president and CEO. "We are saddened at the loss of our dear friend and colleague but honored to have been a part of Rob's legacy, which has touched so many lives."

Rob brought his innovative storytelling and performance art to the Christian Booksellers Convention in 2005 and to more than 200,000 people during his tour that same year. After taking a university degree in economics, Lacey trained at the Desmond Jones School of Mime and Physical Theater and was a founding member of the Trapdoor Theatre Company. Along with his wife, Sandra, he founded The Lacey Theatre Company and was one of the artistic directors of The Gate Arts and Training Center in Cardiff, Wales.

In addition to the word on the street, Lacey is the author of the just-released the liberator (Zondervan, March 2006), a paraphrase of the Gospels, as well as The Poisoned Pool, a self-published graphic novel, and Are We Getting Through (Silverfish, 1999), a communication resource book.

The opinions expressed in this article are not necessarily those held by Cross Rhythms. Any expressed views were accurate at the time of publishing but may or may not reflect the views of the individuals concerned at a later date.
About Zondervan
Zondervan, a division of HarperCollins Publishers, produces Bibles, books, new media products, gift products from its Inspirio group and children's products from its Zonderkidz group. Zondervan employs over 360 people around the world, with offices in Michigan, Miami, London and Sao Paulo. Zondervan authors number more than 1,500 and range from homemakers, business people, politicians and celebrities, to theologians, scholars, philosophers, and ministry professionals. Visit Zondervan on the web for more info.

View all articles by Zondervan

What a book! Fabulous. Heard about it and happened to stumble on a copy in the Salvation Army shop locally. I shall keep it always - unless I find someone else who needs the Bible message given relevantly and simply!(Sure I will but will buy another for myself straight away.) What an author. God bless his family, they can be very proud of him. He was sent by God to help people understand the vital message in everyday language. Thanks Rob.

Thank you, Lord! Thank you for sending Rob our way...
I just got hold of his book today, The Word on the Street-- October 2011! I will be using it to our youth movement in our church!

The Name of the Lord Jesus Christ is to be praised!

I just recently found Rob Lacey's books in a store called Ollie's in my area in upstate New York. He is and was an amazing writer. The wonderful interviews in the book made me laugh and think. Thank you Rob for your inspirational way of writing. I will treasure your books. Until we meet in the glorious light of God.

Just amazed at the wit and wisdom in the Word on the Street! What a talented guy, what a legacy to leave behind for young and old alike! what can I say inspirational, and has made the bible 'alive' again!
R I P !

I have just found out about the tragic demise of the brilliant writer Rob Lacey. My the Lord bless and keep you Rob and may He watch over your family and keep them safe. The Lord be with you always.

Oh my Gosh I am gob smacked to have just read in an article in Christianity magazine of Rob's death. My sympathy goes to his amazing family God bless

i have only just heard and i am devistated, i saw him perform the street bibe in may 2004 and he was AWESOME i am really gutted that i never got the chance to tell him how great he was and i am gutted at how long after it was before i found out, its such a shock i feel sick, i shall miss him so.

What a loss. I had the joy of running across name on the street here in the USA. I was mesmorised by his talent and the format Rob chose to present. I only wish I could have met him on his tour through the USA. May his wife and children be blessed with God's favor and saving grace. We know where Rob is and I hope to meet him there someday.

Without knowing each other, we had the same idea. The Volxbibel is the german "Word on the street", a bible in a very young language, kids speak on the street. We expirienced simular troubel and blessings I believe. I wish so much, I could talk to you, encouraging one each other, and it is so sad, that we can't do that. I don't understand God, but I will keep on believing in you, trusting you, loving you. Pease say hi to Rob from Martin.D

I heard the news recently, I work for Youth for Christ in South Warwickshire, and we use The Word On The Street regularly in the work we do with churched and non-churched and it has a great an amazing impact.

His legacy will for ever live on in all corners of the world.