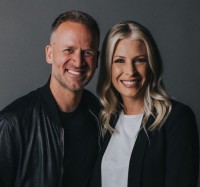 THE GRAMMY-nominated worship ministry Bethel Music have released a single, "God Of Revival". It features Bethel Music's co-founders Brian & Jenn Johnson and was produced by Brian Johnson and Joel Taylor. Said Brian, "As a Bethel Music community, we are experiencing an outpouring of the Holy Spirit, igniting fresh hunger in each of us to go after more of God no matter the cost. We have reached a turning point from which we have resolved that no matter what happens around us - we serve an amazing God. Revival is here and now."