Third instalment of 'Without Words' from Bethel Music 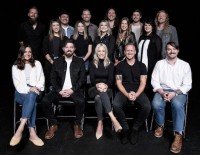 REDDING, California-based Bethel Music, who are 11-time Dove Award winners, have announced the third instalment of the Grammy-nominated instrumental series 'Without Words' will be available on 15th November. 'Without Words: Genesis' is intended to lead listeners into an intimate place of worship. Produced by Seth Mosley (Francesca Battistelli) and LaeL (Anberlin), it presents new arrangements of "Reckless Love", "No Longer Slaves", "What A Beautiful Name", "Raise A Hallelujah" and the recently Dove Award-nominated Josh Baldwin song "Stand In Your Love". Bethel Music CEO Joel Taylor said, "We wanted to tell the story of where it all began: when God the Father created the universe and everything in it, and when he created mankind in his image for his pleasure. Returning to the intimacy of God and man alone in a garden where Adam worshipped him for the first time, our hope is that 'Without Words: Genesis' creates an intimate space for resting in God's presence and fills the heart of the listener with awe and wonder of our magnificent Creator."