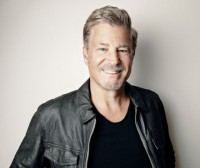 THE VETERAN American worship leader Paul Baloche, who has enjoyed several Cross Rhythms radio hits down the years including his classic "Open The Eyes Of My Heart", has announced that his new album 'Behold Him' will be released through Integrity Music on 28th February. A track from the project, "What A Good God", has been released as a single. The project features guests Kim Walker-Smith, Leslie Jordan, Chris Brown and Kari Jobe.

It's been 20 years since the release of "Open The Eyes Of My Heart" and Baloche feels the same now as he did then. He said, "It feels like the same heart cry - a desire to really see the Lord - to behold Him. I don't want to lose sight of what God is doing in my life and in this generation. I want to see him, hear him and follow him."