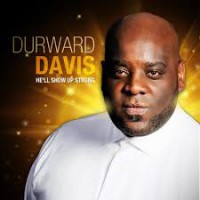 TYSCOT RECORDS and Clout Music Group have released a single by former Sunday Best TV talent search finalist Durward Davis. "He'll Show Up Strong" was written and produced by Stan Jones and will be featured on Davis' forthcoming debut album, 'Never Be Defeated'. Davis is a Los Angeles native and once served as a member of the Oral Roberts Ministry Evangelistic Team. He's an ordained elder in the Church Of God In Christ and lives in Tampa, Florida.