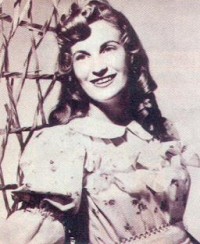 COUNTRY and pop star Skeeter Davis passed away on September 19th 2004 in Nashville, Tennessee. She had been fighting breast cancer. Skeeter was best remembered for her huge crossover hit of 1962 "The End Of The World", which not only reached number two on the Billboard Country Chart, but also made the pop top 10s in the USA and the UK.

Born Mary Francis Penick in 1931, she was raised in Dry Ridge, Kentucky as one of seven children. She confessed, "I didn't have a religious upbringing, in fact to be honest my father was an alcoholic who has since been converted, which I think is just an answer to prayer. It took a long time. I have always felt that God has had his hand upon me." She became a Christian at the age of 18: "Someone once asked me if I was 'into Jesus'. 'No,' I replied, 'Jesus is into me. If you are saved and Jesus is in your life then there is a definite spiritual change in your life. The theme of Christianity is 'God is Love' and I have it on a little necklace I wear everywhere."

Skeeter first rose to prominence as a recording artist in the early 1950s when she and high-school friend Betty Jack Davis had a breakthrough hit with "I Forgot More Than You'll Ever Know" on RCA Records. Tragically, Betty Jack was killed in a car accident but Skeeter continued to record and embarked on a solo career in 1957. In 1959 she joined the Grand Ole Opry and earned the first of her five Grammy Award nominations for "Set Him Free". As well as "The End Of the World", Davis had other successes on the country chart throughout the '60s and early '70s with top 10 hits including "My Last Date (With You)", "Gonna Get Along Without You Now", "I'm Saving My Love" and "I'm A Lover (Not A Fighter)". She also guested on the critically acclaimed NRBQ album 'She Sings, They Play' of 1985 and continued to tour internationally, being a regular on the Opry up until December 2000.

Davis said that as a Christian she had nothing to fear of death: "Although Heaven is going to be a wonderful place I won't be going there till my work is done down here. When he is ready, he'll take me home."