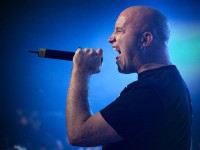 BAY AREA vocalist Luke Easter, who was Tourniquet's lead singer from 1993 to late 2015, will release his debut solo project in early summer. Produced by Kris Kanaho (One Groove, No Master Backs), the record features musicians David Bach (Guardian) on bass, Jesse Sprinkle (Poor Old Lu, Demon Hunter) on drums and Josiah Prince (Disciple) on lead guitar. Also making an appearance is former Stryper bass player Tim Gaines. Talking about his forthcoming album of all new material Easter said, "Up until now, I've been giving a voice to someone else's songs, bringing someone else's musical vision to life. These songs are the closest I've come to something truly reflective of me. It's a snapshot of who I am as a singer and songwriter at this point in time."