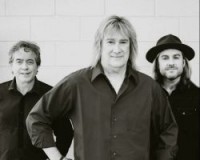 THE BAND The Union Of Sinners And Saints, who in 2016 released a self-titled album and who are now releasing new songs each month in the new Rockify series on download sites, are undertaking a major tour of the US. The band, which features John Schlitt and Billy Smiley of the bestselling Christian rock bands of the '80s and '90s Petra and Whiteheart, will kick off their Storyteller tour on 26th June in Omaha, Nebraska.