Guests such as V.Rose and Papa San featured on album by Canada's Dru Bex 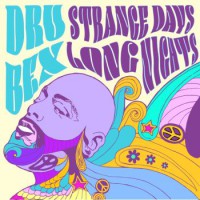 THE RAPPER from Toronto, Canada, Dru Bex, has released the album 'Strange Days, Long Nights'. Read a press release, "Dru Bex is back with his third full-length album with production from go-to beat makers Jeremy Rodney-Hall and Quinten Coblentz, along with bangers from Cardec Drums and solid up and coming producers Hayes and Jaae Kash. 'SDLN' boasts Dru's usual penchant for solid collaborations, this time including the likes of V.Rose and reggae legend Papa San, all coming together to create a darkly painted canvas with moments of brightness, sonically reflecting the fact that so many of us feel like we're living in scary and uncertain days full of anxiety. . . Dru hopes to remind us all that joy comes in the morning!"