Double A side single for Britain's LZ7 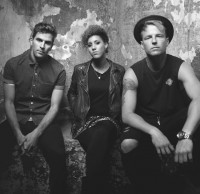 BRITAIN'S most popular EDM evangelists LZ7 have released a double A side single. Read a press release, "'Give My All' features an infused sound of vocal harmonies, drum and bass, and rap sequences for an '80s disco sound. Written by Lindz and Louis the upbeat dance track tells a story of how relationships work best, especially when you give it everything you've got keeping Jesus at the centre. On the other hand, 'Golden' also deals with a relationship but focuses more on the positive aspects of it and the uplifting feeling of being in a relationship that is solid in its foundation. That's what comes from knowing who you are by first knowing whose you are. Ya golden, chosen and accepted! Turn it up and have some fun this summer."