The Battle Of Life 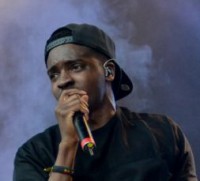 BRITAIN'S most popular Christian rapper, the double-MOBO winning Guvna B, has released the title track from his eagerly awaited new album. "Battle" features a sample of the garage music classic of the same name by Wookie, which was a Cross Rhythms radio hit in 2000. Read a press release, "Guvna uses the bounce and energy to shell over, adding heavyweight basslines and his trademark lyrical ability to create something thoughtful and infectiously uplifting." Talking about "Battle", Guvna B said, "I feel life is about constantly overcoming battles. It's a theme I noticed at a young age. From my parents coming over to England from Ghana and battling to give their kids a good life, right down to me trying to give my newborn son that too. We're all battling something, and I hope this reminds people that we can overcome that."