Session singer Gene Moore to get his chance at gospel stardom 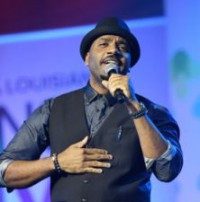 1st SEPTEMBER will see the UK release of the Motown Gospel album 'The Future' by Gene Moore. The Houston-based singer has sung sessions for such acts as India.Arie and Kirk Franklin. Said record producer Aaron Lindsey, "Gene Moore is one of the most gifted and anointed singers I have ever heard. From the first time I brought him to my studio dissing background vocals I said, 'the world needs you to do a solo record'."