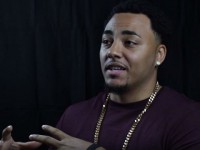 RAPPER Steven Malcolm who in 2017 was nominated for three Dove Awards (New Artist Of The Year, Rap/Hip-Hop Album Of The Year and Rap/Hip-Hop Recorded Song Of the Year) will release on 26 January the EP 'The Second City Part 1'. The project is the first of two EPs which will lead to a full-length album.