Walk To The River 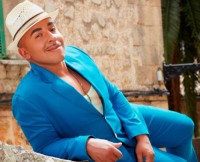 AFTER A dramatic Christian conversion Afro-Cuban and mambo music star Lou Bega has recorded an EP with his wife. David & Jenieva's 'Walk To The River' was released on 15th April, the title track being issued as a single back in January. Lou Bega, born David Lou Bega, was born and raised in Germany, the son of a Sicilian mother and Ugandan father. After a trip to Miami Bega became acquainted with the songs of the mambo stars of the '30s and '40s. Returning to Germany he created his own version of the music and saw his single "Mambo No 5", an updated version of a Perez Prado original, become a global hit. Lou/David's Christian testimony will be featured in the second of the documentary films The Last Reformation, the first of which has had over 1.2 million YouTube views.