A Look At Islam's Apostasy Law 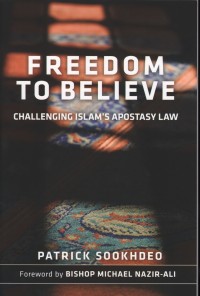 Are people free to change their beliefs and faith? Well under Islam's apostasy law serious penalties are given to anyone who leaves this faith. Various schools of Islamic law hold that shari'a lays down the death penalty for adult male Muslims in possession of their faculties who apostasise. Some schools also prescribe a similar punishment for women, whilst others hold that a woman apostate should be imprisoned until she recants and returns to Islam. In addition, should an apostate somehow escape the ultimate penalty, his property becomes 'fai'', i.e. it becomes the property of the Muslim community; his marriage is automatically dissolved and he is denied Muslim burial.

A recent book is tackling this topic head on. 'Freedom To Believe: Challenging Islam's Apostasy Law', is written by Dr Patrick Sookhdeo. Dr Sookhdeo has doctorates from London University's School of Oriental and African Studies, Western Seminary and Nashotah House Episcopal Seminary. He is an author, lecturer and consultant, International Director of Barnabus Fund, and Director of the Institute for the study of Islam and Christianity.

In his book Dr Sookhdeo details numerous examples of individuals who have fallen foul of Islam's apostasy law...

IRAN: Hossein Soodmand - The Reverend Hossein Soodmand was a Muslim who converted to Christianity in 1964 and acted as pastor and evangelist in the Assemblies of God church in Mashhad. He was arrested in 1989 and charged with apostasy and insulting Islam through his own conversion and by his efforts to convert other Muslims. He was sentenced to death by a Revolutionary Court in Mashhad, and despite pleas for clemency by fellow pastors to the Muslim cleric acting as Ombudsman, he was executed by hanging on 3 December 1990.

IRAN - Mehdi Dibaj - The Reverend Mehdi Dibaj, a Muslim who had converted to Christianity and was a minister of the Assemblies of God church in Babol, was arrested in 1983 and held for almost ten years without trial on charges of apostasy and insulting Islam. During that time he was held for two years in solitary confinement and was subjected to mock executions. In December 1993 he was sentenced to death by a Revolutionary Court in Sari. Following much international pressure, Dibaj was released from prison in January 1994. On 20 June 1994, after attending a Christian conference in Karaj, he disappeared without a trace. On 5 July 1994, the Tehran police reported that his body had been found in a forest west of Tehran. The authorities denied the family's request for an independent autopsy, and he was buried on 13 July 1994.

YEMEN - Muhammad Haj Omar - Muhammad Haj Omar is a Somali who settled in Yemen as a refugee in 1994 with his wife and infant son. He converted to christianity in 1998 and changed his name to George. He was then arrested by the police on charges of apostasy. During his imprisonment he was beaten and threatened with death unless he returned to Islam. On 5 July 2000 a Yemeni court sentenced him to death by the sword for apostasy. He appealed against the sentence, and following the publicising of the case in the West by religious rights groups he was deported from Yemen and granted asylum in New Zealand.

Cross Rhythms: Now the United Nations Universal Declaration of Human Rights states, 'Everyone has the right to freedom of thought, conscience and religion; this right includes freedom to change his religion or belief, and freedom, either alone or in community with others and in public or private, to manifest his religion or belief in teaching, practice, worship and observance.' This UN declaration is obviously in direct conflict to an Islamic world view. What does this incompatibility mean in practice for an individual who might quote the UN declaration to back up his desire to change his faith?

Dr Sookhdeo: Herein lies the difficulty. Muslim countries are signatories to those UN declarations; yet they continue to practice directly or indirectly these various punishments which I have outlined. And I am thinking of governments which are deemed moderate. If a person becomes a Christian in - and I can think of middle eastern countries right now that the UK and America have very close links with - Shari'a law specifies if it's a woman, she will lose her children; and in fact will be imprisoned. So we've got a real problem of how do we get Muslim governments to accept the international norms which they have signed up to; and furthermore how do we persuade British and western governments that the breaking of these international norms are - should be - a cause for concern; and that these countries must be driven to fulfil their obligations. That's at a national level.

When we come down say to a UK position, Muslims, and you'll find this with many Muslims - and there may be Muslims who are reading this, are going to get very upset with what I have been saying - they will say, 'but Islam is a religion of peace, it respects diversity and there is freedom for change'. You will have Muslims quoting a verse from the Qur'an where there is 'no compulsion in religion'. What they don't tell you is that that verse does not refer to a Muslim changing his religion, but rather in the context of Mohammed saying to fellow Muslims, 'look, don't fall out with each other. You know you can accept diversity'.

What we want Muslims to say is that in today's world, given the United Nations declaration on human rights which you have just quoted, every individual should have freedom of conscience. And therefore they must be willing to practice that and allow Muslims to leave their faith. The problem we have is this, Islam is a one-way street. You can enter it but you cannot leave it. And furthermore, if you are born into it, that very fact of being born into the religion means that you are defined as being Islamic and so you are not allowed to leave it.

Cross Rhythms: OK. So the apostasy law has these penalties, even possibly death in some countries. With the fear of death or other penalties on someone who wishes to leave Islam, what knowledge is there of how many Muslims stay in Islam purely because of fear of consequences, rather than a genuine conviction of alignment with the faith?

Dr Sookhdeo: I ought to begin by saying that we must be thankful that today there are more Muslims becoming Christians then ever before in history. And I think that's a remarkable find that with all these penalties and living with the fear of death, and some who have experienced death, many Muslims are choosing to leave their religion and to embrace Christianity. But furthermore there are increasing number of Muslims who leave Islam, who do not necessarily embrace Christianity. They become either agnostic, atheistic, or just simply reject all forms of religion, and particularly the Islamic religion. And you have a number of voices, many of them women, who are now advocating freedom to leave the religion of Islam and to get on with their own lives, because they want that freedom to believe. So I want to give the plusses.

On the other hand, I suppose anecdotal evidence suggests that if this law was removed, then there would be many Muslims who would be free to take that step, and to leave that religion and to embrace either Christianity or have no religion at all.

The comments about allowing aspects of sharia law in the UK being a problem are interesting because I don't hear evangelicals complaining about Jewish family law being allowed the exact same rights. Either there is one Common Law or not. If we allow Jews to have their own, we should allow Muslims to, also. Incidentally, there is current debate about Christians wanting to act outside of anti-discrimination laws regarding homosexuality; seems there is some hypocrisy going on here. As Dr Sookhdeo says, we all have to obey the same law of the land .

Mr. Hubers, we already know that individuals and cultures differ, and we can be confident that the death penalty for leaving Islam will not be imposed every time. Does this mean that all is well, and that the persecution and actual killing of other apostates that occur worldwide should be disregarded?

I say we should keep this ideology, which is at its heart simply a vehicle for grabbing more and more territory for itself, as far away as possible. Why on Earth should I ever be willing to take a chance that once Islam gains supremacy that it will not go the same way as it has everywhere else and deny all non-Muslims the right to live and believe as they wish? It is not these individuals you speak of that are the problem, it is the supremacist and totalitarian nature of the ideology of Islam itself.

While Dr. Sookhdeo is certainly correct in pointing out that more conservative interpretations of Shari'a law proscribe death for apostacy, he fails to underscore the diversity that exists even within Muslim countries. I had the great privilege of baptizing two Muslim converts in one of the Arabian Gulf states while I was pastor there. While their families certainly objected, there was never a threat on their lives. There was also a convert who lived openly as a convert, the son of a Shi'a village imam. And again, while his family did not accept this, leading to an initial ostracizing, he and his Christian wife eventually made peace with the parents who said: "this is our son. We can do no else but accept him."

It's important to stress this as the perception among many in America who know little if anything about Islam is that it is a monolithic faith. It is not. No more, in fact, than Christianity is.