Simon Dillon reviews this gritty, intense, nail-chewing film based on a true story 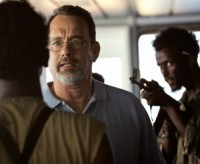 Realistic, gripping, traumatic. These are just three adjectives that spring to mind when describing Captain Phillips, the latest from director Paul Greengrass. Another adjective would be brilliant.

Greengrass has become something of a master at gritty, intense, nail-chewing drama; whether dealing with the fictional world of Bourne films, real life tragedies like Bloody Sunday and United 93, or a mixture of both, as in Green Zone.

Captain Phillips is based on a true story. How loosely I don't know or particularly care as the film is nothing less than riveting. Part of a reason for its success is an extraordinary central performance from Tom Hanks, who may well get another Oscar nod for his work here. Hanks paints Phillips as a bit of a jobsworth at first; a stickler for rules who believes in keeping the indifferent crew on their toes. But his determination to run a tight ship pays dividends when their merchant vessel is attacked by Somali pirates. To say too much more will spoil the drama, though no doubt some viewers will already be familiar with the facts of the story.

Greengrass's trademark shaky-cam is mercifully a little more restrained this time, perhaps because the subject matter demands a lot of wider angles on big ships at sea. Billy Ray's screenplay (adapting the book on which it is based) is a masterclass of stripped-down brilliance that isn't afraid to take time setting the scene (with both Phillips and the Somali pirates) before unleashing a white-knuckle ride of suspense that will have you clutching the arms of your seat. The film is also at pains to point out a possible reason for the increase in Somali piracy. The rampage of globalisation has led to a dearth of fish in waters that were used by Somali fishermen for years. In an age where their seas are constantly trawled by big corporations, the Somalis resort to dangerous, illegal means of making a living. When Hanks challenges one of the pirates, saying there has to be more to life than fishing and piracy, he gets the telling response "Maybe in America".

Like Zero Dark Thirty this admirably avoids gung-ho histrionics in the action scenes. This is no Die Hard-on-a-boat, but a stunning depiction of a real life event in which the consequences of exposure to violence are brilliantly and harrowingly depicted. Earlier this year, Danish film A Hijacking provided a very different, though no less powerful take on Somali piracy which highlighted the dangers of putting a financial value on human life. That film would prove an ideal double bill with Captain Phillips.

All things considered, this is an excellent piece of work which will almost certainly feature in the upcoming Oscar season, mainly because of Hanks' powerhouse performance.

Simon Dillon was born the year Steven Spielberg made moviegoers terrified of sharks. He attended University in Southampton to read Media Studies (for his sins). Here he wrote and directed a number of short films. A few months later he managed to muddle his way into television where he still works today. On the side, he has written a few novels, including Children of the Folded Valley and Spectre of Springwell Forest. In addition to this, he writes film reviews with a Christian slant, which, in his own words, âdo not count every f-word and mini-skirt, but instead try to unpack the overall message â good or bad â that the film containsâ. Simon has tremendous passion to see film used as creative evangelism.