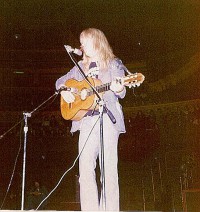 Glam rock had its hey day in the first half of the 1970s. Guitar-driven bands and artists aligning themselves to the sparkly strutting showmanship included: T Rex, Sweet, Slade, Roxy Music, David Bowie and Mott the Hoople.

Other artists such as Elton John, Alice Cooper, Suzi Quatro and Queen were not central to the style but somehow got caught up in the razzmatazz of it all. These musicians were giants in their day.

In the UK, BBC Radio 1 was the main medium for listening to these bands' music. In among the "giants of glam rock," DJ Alan Freeman began airing a song called "Righteous Rocker, Holy Roller" by Larry Norman. Freeman liked this track and told his listeners too. Larry's name started appearing in local newspapers. The Birmingham Evening Mail had a picture of him, with a positive chunk of editorial that proclaimed him a new glam rock artist. BBC's Newsbeat radio program ran a feature on Larry's new album "Only Visiting This Planet" and pointed out that all ten tracks had depth and meaning. Larry was viewed askance by the influential British music press but Melody Maker did review one of his MGM singles and said when it finally gets going it's "a corking ballad". Charles Shaar Murray in the NME labelled Larry a Jesus Freak.

Larry's music in the early 70s didn't get the radio exposure it warranted but there were people, such as Cliff Richard, who championed Larry's cause. Cliff toted Larry's new single "Reader's Digest" while he himself was being interviewed. Radio stations in those days were always keen to speak to Cliff, and while being interviewed on BBC Radio WM Cliff asked the DJ during the interview to play the single he had in his hand, that happened to be Larry's "Reader's Digest", the single then got played - an unorthodox route but effective. Cliff also had a prime time Saturday evening TV show called 'It's Cliff Richard' that ran from 1970 to 1974, he asked Larry to appear on the show but Larry didn't think the timing was correct for him to perform.

All these years later Larry's music is still gaining ground: 29th November 2019 saw the release of the crime-drama movie "Knives Out" featuring Daniel Craig, Jamie Lee Curtis, Toni Collette and Christopher Plummer and neatly nestled into the soundtrack along with Roxy Music and the Rolling Stones is "Righteous Rocker #1"by Larry Norman, the song fits the theme of the movie beautifully - without love you are nothing.

There also seems to be a theme in the Bible - there's usually someone in the middle of "what's going on at the time" who states God's point of view. Joseph, for example, found himself at the heart of the Egyptian government, or take Samson who found himself among the Philistines and was even related through marriage to some of them, or the shepherd boy David prepared to take on Goliath and saying, "You come against me with sword and spear and javelin, but I come against you in the name of the LORD Almighty" (1 Sam 17:45). The "someone" the Bible informs us about is not always a massive part of "what's going on" but certainly has a part to play. David had already killed a lion and a bear, so the giant-slaying was David doing what he normally did when looking after his sheep.

People who turned up to see Larry perform on one of his extensive UK tours would sit in their seats waiting for the concert to begin wondering "Where are the drums and amps?" How is he going to replicate the music that Radio 1 had played? When Larry walked onto the stage with his nylon-strung guitar still in its case the same people wondered "Where's the band?" There was no band. Larry looked like David in front of Goliath with just a sling and stone, all Larry had was a classical guitar tuned down one tone. He may not have shined with the tinsel of glam rock but he did shine in another way.

The three main UK music papers in the glam-rock era were Melody Maker, Sounds and New Musical Express (NME). In May 1973 ads were taken out in all three papers for a show, where Larry Norman headlined, at one of London's premier music venues: The Rainbow Theatre. This was the theatre where Jimi Hendrix had first burnt a guitar. Normally Larry's shows were well attended but this concert was on a Sunday and many people who would normally go to see him were in church. But London's inquisitive concert scene clientele came out to see what he'd got, but not in force, there were a number of the 2,800 seats empty. Touts outside the venue were selling tickets cheap.

The concert began by Larry walking onto the stage with no guitar. By now it was obvious that linking Larry Norman to the glam rock scene was a misnomer. He had some long blond hair and looked a little like Sweet's lead singer Brian Connolly but that was where the similarity ended. Larry had walked onto the stage to introduce his "best friend" Randy Stonehill, who sang three songs and took a photo of the audience. Then The Sheep took to the stage, at last, a band. They didn't stay on stage long but the audience enjoyed the music and shook heads, (as they did in those days). 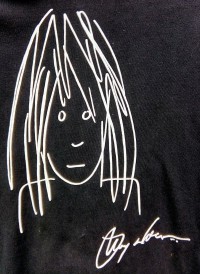 Larry came on stage again, this time with a guitar, the audience went quiet. He opened his set with a song called "Lead Me On" about "a long hair". Most of the audience had long hair, but this time they didn't shake it, they just sat and listened.

He talked about the breathing exercises his music college teacher had taught him to do, he proceeded to show the audience what he meant by "breathing exercises" by making noisy guttural panting sounds, then explained that he couldn't find many places to practice them. The audience laughed. He then performed a pretty good verse of classical male tenor opera, and said he didn't sing opera because he wanted people to understand what he's singing about, more laughs.

Then he said, "I believe in Jesus because of what I've seen." He sang a song about human civilisation that mentions the river Euphrates, where humans first began to live in cities and the state we've got ourselves into now. Then he told the audience he wasn't sure why people displayed stickers about Jesus on their clothes. "Is it because they can't remember what they believe? Maybe they should write it on their cuff, and when they ask themselves 'What is it I believe in?' they could look at their cuff and say 'Oh yeah, I remember.'" The impression being laid on the unsuspecting audience was that faith should be in our hearts or nowhere.

He continued by saying that when he told someone that he's a Christian they say, "Oh really, well what about the Holy Wars?" Larry suggested that, "Perhaps we need to change the name 'Christian' to something else, and 'Jesus Freak' was not the correct option."

This wasn't church, Larry didn't appear to be too interested in falling into line with how a church might operate, but the regular London concert-going public were hearing some biblical teaching all the same. He admitted that sometimes Christians talk to people for 30 minutes and then the person doing the listening says, "Yeah, but that's not my problem," highlighting Proverbs 18:13 "To answer before listening-that is folly and shame."

Then Larry talked about changing the emphasis of his to career to. but before he had a chance to say what his career had changed to someone in the audience shouted, "Talking", meaning, "I changed my career to talking," which was quite funny because Larry had been talking a lot. But Larry replied to the heckler by saying, "You too," which was also funny because the heckler was talking when he ought to be listening.

The audience bristled from that point on, there had been some tension between artist and audience before that point but now it was less like a concert and more like a contest. The people may have wanted their normal musical fare but didn't get it; something else was served to them instead. Larry continued talking and finished what he wanted to say, then he sang more songs and the audience got music; high quality music too.

We sometimes find our selves in a similar position - we may be the only person in our family, or where we work who has faith in Christ, but some rooms only need one light bulb. God said, "Let there be light" and sometimes he has placed that light inside us. Our job is to let it shine in our own inimitable way in the environment that we find ourselves. We are all jewels that heavenly light passes through in different ways.

Larry once asked me if I thought he spoke too much at another concert he did. I said, "No, that's what you do."

The opinions expressed in this article are not necessarily those held by Cross Rhythms. Any expressed views were accurate at the time of publishing but may or may not reflect the views of the individuals concerned at a later date.
About Paul Poulton

Paul is a singer/songwriter, author and speaker. He records and tours solo and with his band, the Paul Poulton Project in the UK, US and Europe playing rhythmic and expressive songs. He has written four books including âGenesis for Ordinary People.â

View all articles by Paul Poulton

Great article, Paul. I love Larry Norman's music, but admire the challenge of his lifestyle and spoken word even more. I think many current churches could learn from the idea of not (always, at least) entertaining with music but, rather, sharing Jesus' love via the spoken word.

Your comment, "Some rooms only need one light bulb", is also quite profound. So, if you'll excuse me, I'm off to let some "heavenly light" shine through this particular "jewel" and light up today's room.