Pastor and member of the Resurrection Band GLENN KAISER is set to attend the Cross Rhythms Festival in July. He still found time to give readers his random thoughts on reality and virtual reality. 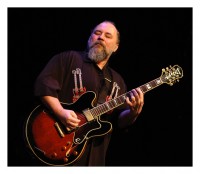 In a very good (and at times, entertaining) conversation the other day, several writers in the Cornerstone Magazine office discussed art, films in general and specifically violent images in cinema. The topic moved into issues of war, justice and some of the latest "modern world view", certainly in terms of the decadent West. The following is a summation of my thinking on the issues. As you will see, the answers aren't always easy.

We can seemingly (and take great pains to...) justify the use of almost any weapon in order to get control and/or maintain control. When control is lost, we move on to other "weapons".

As a Christian and an American, my thoughts on the Gulf War were:
1. God have mercy on "our" and the Allied nations' troops.
2. I particularly prayed for the safety of Christians and that they might offer a strong evangelistic witness to their comrades-in-arms.
3. I also prayed for our government to make "right" (God's will) choices in all things pertaining to the war.
4. I hoped (not prayed) that Saddam would be killed, for the sake of the suffering of his own people (before as well as during the war), knowing his reign of terror would continue unless he was deposed.
5. I prayed for a witness of Christ in Kuwait, and for the liberation of Kuwait, as well as for a more democratic sense of justice for Kuwait's people once the war ended.
6. Prayed fervently for mercy in Israel as scud missiles were fired upon that nation.
7. Felt in all of the above, the greatest shame in knowing that although there was a genuine risk for many nations if the regime in Iraq was not toppled - yet - and this is the punch line -I believe that the entire war had more to do with US power, oil and our chosen "comfort level" than any other single factor.

Our little discussion group considered the idea of violence in the Bible's own words, in today's inner cities, wars, etc and finally, some of the cinematic portrayals of violence.

I don't think any earth-shaking revelations were had, but what I do think is that we have come to another point in time where the Church has got to do some very strong thinking BEFORE it reacts in all-too-frequent "knee-jerk" form. Yet it must act and not simply stand by the road staring at its collective shoes.

As for cinema? Well, we must be more thoughtful and discerning rather than adopting a "swallow first, ask later" approach. Many believers are far too ignorant of the reality of violence and sexual misconduct that is very much threaded through our very real lives and times. We must beware publishing ignorant, "more heat than light" statements about films we haven't seen, books we haven't read and situations we rarely encounter. Our pastors, teachers, authors and other communicators must be firmly grounded in the Bible and its absolute Truth, yet they must do some of the painful homework of research based on actual, substantiated FACTS as opposed to simply emoting.

I am well aware of the risk (and common temptation) of making huge, moving statements in order to garner a crowd's (or individual's) ear for a position that I believe is more biblical, solid and true. I am also ashamed that I and many if not most Christian leaders have truly hurt the cause of the Gospel by doing so. Os Guinness is quite right when he calls for Christians to engage in prayerful, thoughtful conversation in the market place, media schools and street corners. Not all of us are called to research (thank God!) the deepest dregs of sin in society, but if no one takes the time to do that sort of work we will often find ourselves and our arguments (no matter how true) left in the dust for lack of relevant information.

Example: I have gotten into countless conversations about the "evils of rock music" with people who, upon further questioning, knew nearly NOTHING about what either the Bible, church history OR popular culture truly thinks about such things. They would go on to quote completely fabricated stories that in many cases, the typical non-Christian rock fan KNEW - not just suspected - were ridiculous. So any possible credibility to their argument was shot down in flames before their ideas (right or wrong) even had a chance to be heard. This is why sometimes, regarding some issues, near silence is the only honest course of action for a thinking Christian.

Silence, until the hard work of thinking, research and prayerfully seeking what God may say on the topic is done. After which there may be application of salve to the wound.

Ahhh yes, another day of solving the world's greatest problems in one fell swoop.

As always, God has the last word: "(There is) a time to be silent, and a time to speak."

I agree with what Pastor Kaiser said; all those things that occured during the gulf war were wrong! We wer involved in war because of them! I did a tour-of- duty during that time; my head was shaved when I joined the "core!". I have since let it all grow back. Critics should abstain from being critical about rock music that has christian lyrics; that`s not a christ-like attitude. Their is only one you! J.Moser