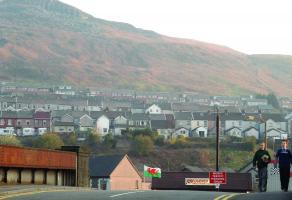 The Rhondda is part of the valley landscape north of Cardiff, the valleys that became world famous for producing the best black coal in South Wales. The two Rhondda valleys, both starting in Porth (the Gateway), run towards the hills of the Brecon Beacons. They became very densely populated from the late 1800s as the mining industry blossomed. An area that was previously virtually unpopulated became the home to well over 150,000 people living in infamous small terraced homes.

Miners and their families weren't treated well either. Little of the wealth generated by the mining industry was actually given back to the Rhondda and it has left deep scars in the community. To add insult to injury, when the industry collapsed in the Thatcher years, the whole area was left with nothing except mass unemployment, poverty, a broken spirit and depression. It is little wonder that the area has become infamous for topping the national statistics on crime, drug abuse, broken families, teenage pregnancy, suicide and unemployment. Every week the front page of the local newspapers presents grim reading. Spiritually, the valleys have the highest number of chapels per square mile in Wales (or the UK for that matter); but most of them are now derelict or shut.

But now in the Rhondda God has orchestrated some initiatives to bring fresh hope to the area. Just like in the Old Testament when God told Gideon to send most of his army home, and in the end, with only 300 left, he defeated a massive enemy army, so it is here in the Rhondda. God is using a handful of believers who believe God can and will bring a complete turn around in this community. After years of praying in the backroom, groups of believers in these valleys have finally recognised it's time to act, to move forward. To do more than just talk about Jesus and actually get involved with the community like never before and show that the life-transforming message of Jesus still has power in the Rhondda today. How is that happening?

Leading the way and paving the spiritual ground for many other initiatives is Sporting Marvels (endorsed by Cross Rhythms). In their work, Sporting Marvels bring in gifted young sports coaches from all over the world, male and female, to work full time in the local primary and secondary schools, training the youngsters in all kinds of sports, gaining their trust and at the same time showing a Christian lifestyle. Plans and funding are in place to bring in 28 sports qualified, mission minded, Christians, and all of them from outside the UK! Backing up this initiative is prayer. One of the most significant developments has been the staggering increase of prayer into the community where a team of pray-ers are being established to pray for every single home in the Rhondda - 33,000 homes and one pray-er per home! 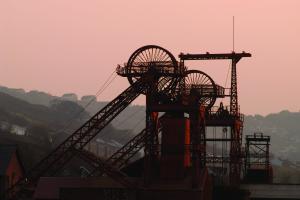 Says Phil Davies, the leader of Sporting Marvels, "The secular message of the project is 'Sport Is Good', the Christian message is 'Jesus Is Lord'. The spiritual climate in the streets is already changing even though the project is still very much in its early days." Tofind out more about Sporting Marvels go to www.sportingmarvels.com

Meanwhile, youth leaders from several churches in the Rhondda have pulled together and formed a co-operative platform called Release. The collaboration has meant that Rhondda Christian youth meet regularly for worship and prayer and being able to bring their friends into a relaxed environment of alternative worship. Off the back of this they launched in January a bi-monthly big night called Reload. Held in the Pop Factory, the building of the famous Corona fizzy drinks factory and now re-designated as TV studios used by broadcasters such as HTV and BBC Wales, Reload has become the perfect place for an exciting evening of live music, drama, video-clips and more.

Local youth are responding well as Christian bands like Axlanbay and Superhero have attracted good crowds, and set the scene for much more to come. The Release youth leaders are delighted and fresh vision is being inspired - to open a youth club (for at least one evening per week) in every cluster of villages of the Rhondda valleys (34 villages in about 15 clusters), and to develop cell groups for discipling young people.

God is at work in the churches too. The handful of churches that are left in the Rhondda are experiencing a new move of the Spirit; some more than others. People from all over the world are visiting the Rhondda and praying for a breakthrough in the community. Prophetic words have come too. In fact, when Phil Davies from Sporting Marvels travelled to Guatemala for a world conference with Christian leaders, he was given a powerful prophetic word by the Reverend Ariel Kim Dong Joh, who is linked with Dr Paul Yonggi Cho from Seoul in Korea: "Many American pastors say, 'Such and such a place will be the Almolonga of the United States'. (Almolonga has been an example of a community which has gone through transformation.) But greater things are coming in Europe. Because Europe needs a revival. And I will use Rhondda to be THE example in the area of transformation of community, revival and even reformation. Rhondda will not be one of the examples. It will be THE example. Why? Because Europe needs a revival. Because the Europeans have been too arrogant. But the time has come. I will use Rhondda as THE example; not an example, but THE example, and many examples will follow what I do in Rhondda." 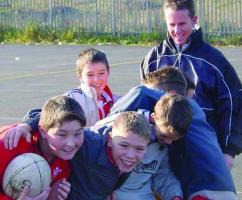 Meanwhile most of the Rhondda churches have pulled together in a new working relationship, which appropriately is called The Rhondda City Church. Appropriate because although the area is not a city it strongly feels like an inner city ghetto. There's a recognition that a move of the Spirit of God is gaining momentum and it's no longer a question of whether, but simply a question of when! When the gusher will burst from the ground and the valleys be flooded once again by the Spirit of God. As in Oscar Wilde's story of the gentle giant; after years of wintertime, finally spring breaks through. Now into this setting comes another exciting initiative, the Revolution one-day festival. To celebrate what God is doing in the Rhondda, this coming July 17th there will be a one-day "music, word and image festival", with Christian bands, teaching, ministry, arts and performing bards. Revolution, being partnered by Cross Rhythms, will be a busy programme. Apart from the three or four bands playing that day, there'll be interviews, video clips, solo singers/ performers, theatre, film, art exhibition, poetry, speaking Scripture (by heart), comedy, teaching, jamming and play-back theatre.

It is expected that people will come from all over South and Mid Wales, and possibly across the border from south west England. But the heart of the event is for the people of the Rhondda. To be a gift to a community. To encourage, lift up and inspire with hope and fresh purpose. To know and believe once more the words of Jeremiah, "'I know the plans I have for you,' declares the Lord. 'Plans to prosper you and not to harm you. Plans to give you a hope and a future.'"Â

Having Pastored ,the Upper Rhondd Group Of Baptist Churches (Zion ,Pentre ,Horeb Treorchy,Bethel Cwmparc,Providence ,Ynyswen)from1976-1989 prayers .I thank God for answered.Ever since I left my beautiful vallyey I have been storming the throne of grace with my prayers for a revival . God does answer our prayers .
Jesus is very much alive in RHONDDA !

Not sure if you are still checking this but I just wanted to let you know that unfortunately David Edwards passed away this week and we didnt have another way to contact you.

We were unsure whether or not you were still in contact with him and didnt want you to hear the news from another source.

My email is here if you would like more information.

Hi Neil,
Are you still out there somewhere?
I remember you well from the Baptist college in Cardiff in the late 60Â´s.
Drop me a line, please.