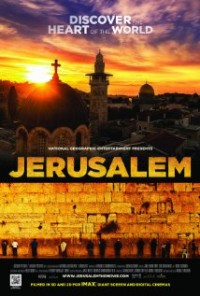 Last week saw the London premiere of Jerusalem - a stunning 3D IMAX documentary showcasing the most fought over city on earth.

Clocking in at just 45 minutes and suitable for all ages, the film serves its educational purpose well. Having visited the city twice I was interested to see how the producers would portray the current political situation. The answer turned out to be simple: They wouldn't.

Focusing solely on history and religion, the film tells the story of Jerusalem through the eyes of three girls - one Jew, one Muslim and one Christian. Most viewers seemed to appreciate the balance and fairness shown to the three monotheistic religions. It was clear that every word of script (narrated by Benedict Cumberbatch of Sherlock fame) had been agonized over so as not to offend anyone.

Jerusalem isn't the easiest of cities to portray. How do you convince the authorities to let you fly a helicopter low over the city with a camera mount that could easily look like a missile launcher? In a short Q&A that followed the film, the two directors revealed that many Jerusalemites received the project with skepticism and suspicion. They also hinted that some shots were captured without permission.

Jerusalem is Daniel Ferguson's follow up to the 2009 IMAX production Journey to Mecca. There was a sense of anticipation as the British director prepared to show the film to his home crowd in London - especially as some in the room had financed the film.

The portrayal of Christians focused on the major Catholic and Orthodox denominations. The Western Protestantism that viewers in the UK and US are so used to is absent from this film. Eastern Christianity is worlds apart from its Western counterpart.

Thanks to the documentary's focus on traditional Christianity, the alternative site of Jesus crucifixion and resurrection - The Garden Tomb - was sadly ignored. But this is a minor quibble. Christian viewers will be pleased to see the Old City, Garden of Gethsemane, Mount of Olives and even Galilee all captured on film.

Even documentaries portray a message, and the message here comes across loud and clear. Ferguson hammers home the point that these three 17 year old girls from three different religions live within a square mile of each other but are not friends. They know little to nothing of the other's faith and culture. They do not know the other's narrative. And according to Ferguson, they should. The director wants his film to promote peace and interfaith understanding.

Filled with fascinating facts, (did you know the city has been conquered 40 times in 5,000 years? Or that the prophet Zechariah is buried on the Mount of Olives?) the film serves as an excellent educational tool. Already breaking records in the US, there's good reason to think this production will be shown in the many IMAX screens situated in museums around the world for many years to come.

No film will ever be able to capture the magnificence of Jerusalem. There's no suitable alternative to visiting the city itself. But that said, there are moments in Jerusalem where you can almost smell the many smells emanating from the crowded Old City streets.

This film reminded me about the reality of the type II Jerusalem syndrome that I acquired on my last visit. Defined as a 'culturally anomalous obsession with the significance of Jerusalem,' the syndrome can become all encompassing. There's no other city on earth that I feel drawn to. It's not so much that I want to go back. I have to go back. Films as glorious as Jerusalem only makes that hunger grow.

The opinions expressed in this article are not necessarily those held by Cross Rhythms. Any expressed views were accurate at the time of publishing but may or may not reflect the views of the individuals concerned at a later date.
About Sam Hailes

Sam Hailes is a Freelance Journalist and Social Media Manager based in London. He loves to write about everything from popular music to Middle Eastern politics. You can follow him on Twitter @samhailes.

View all articles by Sam Hailes

Thank you so much for this well written review. It answers the preliminary questions I have prior to my child's field trip to see this film. Now, I can't wait to see it too!