Bev Murrill on taking a leap into the unknown 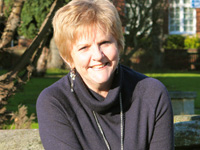 It was December 2005 and we were in beautiful Jamaica. Two young friends of ours were getting married and we were asked to do the wedding ceremony. What came with the package was a fantastic two-week holiday in an amazing resort - sun, sand and sea, all there on our doorstep and wonderful weather every single day!

On one of those days we went to a beautiful place to see the sun go down, Rick's Cafe. Our party of thirty went to watch the Jamaican guys diving forty foot from the cliff top into the breathtakingly blue Caribbean Sea. As we stood and watched the guys hurl themselves fearlessly from the rocks, there was born in all of us a longing to do the same.

Without giving myself time to think about it, I stripped off to the swimming costume I wore under my jeans and top and headed for the cliff platform. There was a little queue of people in front of me, but to my surprise, apart from my son and a friend, the others stayed behind on the viewing platform. The bridegroom wanted to jump, but with the wedding only a couple of days away, his bride put her foot down. Who wants to risk having their brand new husband in a body cast!

I've always been scared of heights! It's worth saying that so that you don't think that I found it easy. As I stood on the top of the cliff waiting for the guard to give the signal, I wanted with all my heart to chicken out. My problem is that once I've made up my mind to do something, I feel totally committed and don't easily go back.

So...I jumped! Falling forty foot downwards through the air is an interesting sensation that screaming doesn't really alleviate! On my way down I had a thought. I wish I hadn't done this! But it was too late for thinking now. I should have done that back up on the rock.

Everything would have been ok except that instead of holding my body 180 degrees straight, I had tipped my legs ever so slightly inward. So, rather than hitting the water feet first, it was more like thighs first! Instead of cutting the water cleanly, I slammed into it like a Mack truck. As I swam to the ladder, I remember thinking that it had been a long while since my body had hurt this much.

Actually, it looked a lot worse than it felt. From the base of my back to my knees, my legs went bright red, then quickly turned to a rich purple. Over the coming weeks, yellow slowly replaced the purple until finally, a number of months later, all signs of the bruising were gone.

The fantastic thing about that story is that my careful husband had done what he said he would do and that was to take a video of the jump. Over the next few days, when concerned people asked what happened and whether I regretted it (remember we were at the beach and being in my swimmers every day gave everyone a horrifying picture of the damage) I honestly had to say no. The thing is: bruises last for a while, but video footage lasts forever. When I'm old and sensible (not holding out too many hopes for that as I was 54 at the time) I will still have the evidence of my leap!

Life's like that sometimes, isn't it. You go out just to take a look at what other people are doing and suddenly, you're hooked and you want to get involved. Generally it's something you never thought of doing before, like supporting an orphan child in Africa, or working as a street pastor or giving your time to the local school. I have friends who have moved to Uganda to work with AIDs orphans. They've given up home, family and comfort to do something they feel God has called them to. Other friends are stepping out of the comfort of a large church in order to live in a deprived area that needs to know in tangible ways how much God cares for them. One of my friends is a 'befriender' to a young boy whose family is dysfunctional and he needs someone stable to relate with. Another couple have adopted a little girl from China. I never intended to leave my native Australia, but when God called us to England, I closed my eyes and jumped into the purposes of God.

I don't know what jumping off the cliff might look like to you, but I know that God has a plan for every life, and it's generally not what we planned for ourselves. God's plan will take us higher, wider and deeper than anything we could think up on our own. It's just a matter of letting yourself think beyond your own limitations and allowing Him to awaken your desire for something beyond what you've ever done before.

Lost contact with you. Please could you send me your co-ordinates so I could call you.

Diane, I know that the road is not as easy as you thought that it would be. There are a lot of obstacles which are insurmountable, no matter what. I wish that we could have talked before you set out on your present journey. You are a stronger person than me, and the circumstances are much different. Please feel free to contact me via facebook. You have a very difficult road ahead of you! May the Lord bless you! Maggi J