Let's Not Forget Bethlehem: A place of birth and sacrifice

Julia Fisher urges us to support those suffering in Bethlehem. 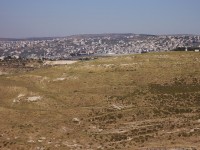 Once a year our attention is particularly drawn to Bethlehem...the star, the shepherds, the flocks of sheep, the stable, the magi, the manger and a baby. How accurate some portrayals of the nativity story are is perhaps open to question. But what is beyond doubt is that few of us would choose to visit Bethlehem today, let alone live there because, on the face of it, it's a run down, depressed town. So does this once strategic place (now under Palestinian control in an area known as the West Bank) have any future contribution to make to the spiritual life and well being of the Holy Land or has she fulfilled her contribution in God's scheme of things and is now destined to gradually shrink and disappear? The Church of the Nativity, claimed to be built over the stable where Jesus was born, is the oldest church in the world that is still in use as a place of worship. Hence Bethlehem has a long Christian heritage and has been visited by pilgrims for centuries.

Recently I was in Bethlehem. The streets seemed even more deserted than when I was last there six months earlier. Hovering around the entry point into Bethlehem were the usual old yellow Mercedes taxis plying for trade, but there were not many people needing their services. I didn't see one tour bus all day. Even the refugee camp in the centre of town appeared devoid of life - usually there are crowds of children playing football on the piece of ground adjacent to the road. The pavements were dusty and the roads in need of repair. Not many shops were open and those that were looked as though they were just going through the motions. There was the occasional pavement cafÃ© - but the tables were not thronging with visitors; rather locals sat looking up and down the streets - for what, I wondered. Looking into the faces of the people I saw anxiety and sorrow. Unemployment is the norm. The security wall looms high around this ancient Biblical town, and the shadows it casts are long. It felt to me as though a cloud of despondency had settled over Bethlehem; so I was looking and listening for any sign of hope.

Walking the streets of Bethlehem today it's easy to forget her rich contribution to the history of Israel. First mentioned in Genesis the town was originally called Ephrath. It was the place where Rachel died and was buried.

Later in the book of Ruth it is called Ephrathah...where Ruth, from Moab, met Boaz, became his wife and had a son called Obed, the father of Jesse, the father of David. David, later to become King of Israel, was born here.

In Micah, Bethlehem Ephrathah is prophesied as being the birthplace of Jesus. Later, in Luke's account, we read how this prophecy came true..."So Joseph also went up from the town of Nazareth in Galilee to Judea, to Bethlehem the town of David, because he belonged to the house and line of David. He went there to register with Mary, who was pledged to be married to him and was expecting a child. While they were there, the time came for the baby to be born, and she gave birth to her firstborn, a son. She wrapped him in cloths and placed him in a manger, because there was no room for them in the inn." 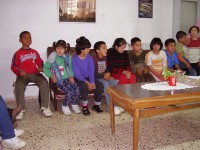 And a place of sacrifice? Let's not forget the hundreds of baby boys murdered by Herod in his jealous attempt to eradicate the baby born to be 'King of the Jews'. And what about those flocks of sheep? It is well documented that sheep were reared on the hills around Bethlehem specifically for sacrifice in the Temple in Jerusalem just five miles away, surely no coincidence that Bethlehem became the birthplace for the Lamb of God. But that's not all because the name Bethlehem means House of Bread and we learn that wheat was grown in the fields around Bethlehem and brought to the Temple for use in offerings. And that reminds us that Jesus is described as the Bread of Life. So much of significance happened here.

What a rich heritage, but at what cost. So what's it like today to live in the town where Jesus was born - is it still a place of sacrifice?

I was in Bethlehem with a group of church leaders from the UK. We were there to meet Christian leaders in the town; listen to their stories; try to understand the difficulties they face day by day with the aim of seeing how we could support their work.

It's almost impossible for us to fully appreciate just how difficult it is being an Arab Christian in Bethlehem today; a minority amongst an increasingly hostile Muslim majority. It's dangerous to sympathise with Israel and the Jewish people if you live in Bethlehem. Such sympathies could cost you your job or your life. No Jewish person has been allowed to even visit Bethlehem for some years now...their safety cannot be guaranteed.

So come on an imaginary journey with me to meet an Arab pastor in the town. He cares about all the people who live there, whether Christian or Muslim. He knows many do not have enough money. He sees the hunger. He realises some children need new shoes. He hears the need for medicine. He feels their pain.

What can he do with the little he has? It is not enough. In his dreams he turns to the West. He sees they have wealth - he has satellite tv. Surely they will support us?

But, to his dismay, he comes to the realisation that his plight, and the plight of those he cares for is hardly reported; other stories hit the headlines and the Christians in Bethlehem remain forgotten. 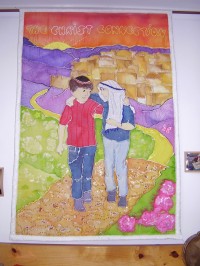 A picture of reconciliation in the Middle East

One pastor told us, "In a hopeless situation it is important to see hope. Potentially it is hopeless here. Hate is escalating. Those aged 25 years and under are full of hate. Children hear the call to become martyrs - and that excites them."

I have met and written about many Arab Christians living in Israel and the wider Middle East who are wonderfully reconciled with their Jewish brothers and sisters. I have come to appreciate that reconciliation is messy and takes time; it is a gradual process involving forgiveness and building trust. It demands that those involved move out of their comfort zone. I believe that our job is to aid this process by showing practical support. If you want my theological basis for this conclusion then look no further than the story of the Good Samaritan; a story of how one act of generosity motivated by love won the day.

We have to go there, whether in prayer or in person, and get our hands dirty and help the people - otherwise there will soon be no Christian Arabs left in Bethlehem. Many Christian families have already left the town and moved to another country. Who can blame them? Who would choose to live in Bethlehem today? But maybe, and wouldn't it be just like God, if Bethlehem is destined, once again to bring hope back to Israel through the stories of Christian Arabs who live there.

And who will help to bring hope back to Bethlehem? The very Life and Hope who was born there 2000 years ago - Immanuel, God with us.

The opinions expressed in this article are not necessarily those held by Cross Rhythms. Any expressed views were accurate at the time of publishing but may or may not reflect the views of the individuals concerned at a later date.
About Julia Fisher

Julia Fisher is a writer and radio broadcaster and Director of a charity called The Olive Tree Reconciliation Fund. She has travelled frequently to Israel and the Palestinian Authority areas researching the stories of the growing numbers of both Jewish and Arab believers in Jesus. Julia has taken a particular interest in those who are truly reconciled despite the politics of the region, and who are actively working together because of their belief in the Bible. Many of these stories have been published in books (including âIsraelâs New Disciplesâ and âMeet Me at the Olive Treeâ, pub Monarch) and articles by Julia.

View all articles by Julia Fisher

I hope and pray that God will turn the situation around for his faithful people and give them strength to hang on to Jesus. We in the west have so much to learn.

good to see something on bethlehem and the christain arabs...............their plight is truley sadening..... those that were once well off having to deal with grinding poverty...... or leave for better climes......having not long come back from the city l feel now is the time to....... "awaken and strengthen that which remains".......pray for these people that hope and dignity could be restored to them soon......
thank you julia for bringing their situation to light........