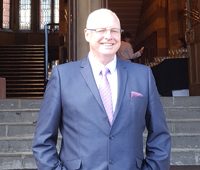 Just recently comedian Andy Parsons was filmed in a shopping mall just sitting down in a seating area starting a conversation with a total stranger. You can see the clip on You Tube entitled 'Let's Talk More - Together we can end Loneliness'.

It is interesting to see people's reactions, especially when they see he's really interested in them and wants to have a conversation with them. How often do you and I take a few moments in our busy lives and just stop and talk to one another? Obviously not many of us as it is estimated that over nine million people in the UK are lonely.

'The most terrible poverty is loneliness, and the feeling of being unloved.' Mother Teresa

How often do we see people sat together on a bus, in a cafÃ©, pub or restaurant and rather than talk to one another are staring at their phone. Joanne Harris suggests 'Online communities are an expression of loneliness'.
Most of us have and do feel lonely and isolated at some time in our life. We long for someone who will listen to us ramble on about how we are and what may be going on in our lives. Loneliness can affect people of all ages.

As Thomas Wolfe says 'Loneliness is and always has been the central and inevitable experience of every man.'

On the other hand, no doubt we have all experienced what it's like and how we feel when someone takes the time to ask 'How are you, or how are things'? It is very interesting to watch how Andy Parsons creates a conversation with a total stranger and in just a few short minutes gets other folk talking to one another who have never met before.

We can all take small steps in changing things for ourselves and for others. In 2017 at the Winter Gardens in Sheffield a Talking Bench was installed to encourage people to talk and listen to one another. The idea came from a Sheffield resident Sharon Tabberer due to her observation of the struggle she saw her father going through in the whole area of starting a conversation as he got older.

The idea is to help reduce loneliness and improve personal connections with different people. Apparently this has a huge success. Simply, sitting on the bench is an indicator to other passers-by that they would like to have a chat. This idea is wonderful and working and other cities are also allocating 'talking benches.'

Let's remember chat is free. If each one of us just had one short conversation with someone daily we could make a huge difference and begin to make a dent in the nine million lonely people.

The opinions expressed in this article are not necessarily those held by Cross Rhythms. Any expressed views were accurate at the time of publishing but may or may not reflect the views of the individuals concerned at a later date.
About Baz Gascoyne

Baz lives in Sheffield with his wife Linda. They head up a charity called South Yorkshire Chaplaincy and Listening which they launched in 2017, providing chaplains and trained listeners for the Business world.

View all articles by Baz Gascoyne