Life As A Refugee part 2

Emily Parker interviews Theodore Mbazumutima about his book 'My Country Wept' and how he is using his experience of civil war to help other refugees. 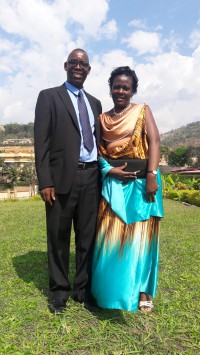 Emily: I'd like to talk about Thierry and your friendship. You went through an awful lot together. Tell me what his friendship means to you.

Theo: I met Thierry in my O Level year; we were in the same Christian Union. When I went to study in Gitega, he went to study in Bujumbura. I left the country on my own, up to Tanzania with all that happened. He stayed in Bujumbura until a bit later, when he managed to cross over to Tanzania. And we met in Mtabila refugee camp, which was established long after we had been in Tanzania for many months. We lived together in a shanty house, which we had been able to build together with his brother Muzima and other boys that we knew from my home area. This is where we reconnected with Thierry again.

We decided to leave the camp for a number of reasons, including wanting to study and to run away from the pressure to go to fight. There was a lot of recruitment of rebels in the refugee camps, and when you were young it was unacceptable that you wouldn't go to fight. Other Hutus would expect young people to go and fight, so they could overthrow the then Tutsi Government. So we were trying to run away from all that and we decided to go to Nairobi, because Thierry's cousin was there. We thought if we get there it will be easy to get settled. But our journey from the camp to Nairobi would be another adventure, full of nightmares, but also God's provision and God's miracles. 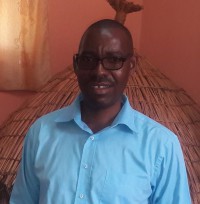 Theo: Today, we are very good friends. Thierry is now a vicar in the Anglican Church and he's a professor in one of the local universities. We've always been together and he's a good friend of mine. He was my best man when I got married. We are really close. I thank God that our dreams to study came to fruition in God's own timing. Thierry got his PhD in theology; he is now a professor at International Leadership University and is the vicar of a parish at the same time. He has a family and lives in Bujumbura, where I live.

Emily: There's one part of the book I'd still like to speak about. You mentioned forgiveness earlier, but there's one key moment when you left Tanzania to return to the danger in Burundi. You go back in order to apologise for a chicken that you stole from a family, who were Tutsi. Tell me what happened and why you went to find Jean, the family member whose chicken it was.

Theo: We usually change the names of people in the book for their own protection, and for ethical reasons. When I returned to my village from school and found that my parents had left and only my sister was still there, I stayed for some days before the army attacked, maybe a week or so. We would eat whatever we came across. But then a cousin said, "Why do we keep eating our own food? Why don't we go and look for the chickens that were left by the Tutsis?" So we did it out of anger and frustration. We went to our neighbour and started chasing the chickens; we caught one and killed it and ate it. During the war this was a very normal thing. We would eat chicken, beef, anything that we came across and it wasn't considered stealing. But this one, specifically, we wanted to kill it simply because it belonged to a Tutsi. It was like another revenge, on property.

When I went to Tanzania, I was praying, we had a lot of time to pray, we weren't doing many things in the camp. When I went to bed, or read my Bible or prayed, I always saw this chicken coming to me. I felt convinced that I had to apologise to the neighbour, from whom we had taken this chicken. There were no phones, so I couldn't call. It became such a big matter. Sometimes I would think it's just about a chicken. Why do I need to worry? It was during the war, people died. Why does a chicken have to be an issue? But the voice was so intense that I couldn't really sleep, but it was God doing that and teaching me that a sin is a sin. It doesn't matter how big it is and a sinful life is not acceptable in His sight. I wasn't managing to sleep well and I wasn't managing to pray, I wasn't concentrating on things, I kept seeing that chicken running. In Africa we let our chickens run free and we run after them to catch them. I felt I would rather die than continue to fight with this. But I also felt God had done so much for me, saved me on several occasions, and if He's asking me to ask for forgiveness I should do it.

So I walked 75 kilometres to the border, plus another 25 kilometres to my home. I had to sleep in the bush. Finally I arrived at my neighbour's house around six in the evening. My neighbour came out. Her husband had been killed by Hutus; all her in-laws had been killed. She was the only one left in that family. She had married again, but I found out where she was. At first she didn't understand why I was there and she was traumatised by all she had gone through because of my fellow Hutu men. I told her I had come to apologise and was really very sorry for stealing her chicken. And I felt I couldn't have peace unless I apologised. Also I was ready to pay for it. I didn't have any money then, but I would pay later. She said that's nothing. I also want to apologise to you because we took the iron sheets from your father's house. Please tell them that we apologise. We've been feeling very guilty about it.

It was getting dark so I didn't stay there for more than 30 minutes, but those 30 minutes were such a big moment of worship to God and her apologising to me. It really built up my faith. Asking for forgiveness is powerful. She said I don't need to pay anything; we did more bad things to you. I thought she would be very angry with me being Hutu, even if I was not the one who killed her husband and her whole family. But she was very compassionate, receiving, and very apologetic as well. That was the power of forgiveness and asking for forgiveness. So I left feeling so happy, almost flying in the air. I thanked God and said you have shown me again that you are with me in the very big things like death, but also in the very small things like stealing chickens. God's eye is still on me even in those small things.

Emily: Tell me about Rema Ministries and the work that you do now.

Theo: Rema Ministries is a non-denominational Christian organisation. We work with migrants, displaced persons and refugee returnees. We try to prevent migration, or we try to manage its consequences. Basically we work with refugees and returnees. 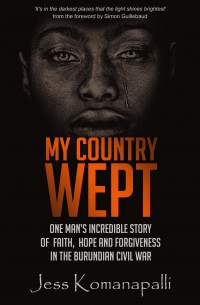 We help them in three ways: one, we do a lot of direct interventions, for example, we run a clinic which gives healthcare to the returnees and people who have been affected by war. We treat them for free or at very subsidised prices so everybody can afford that healthcare. We do a lot of community healthcare too, distributing water to villages that wouldn't otherwise have clean water. The direct intervention also includes helping people to start up small businesses by providing training and organising them in groups, giving them loans. We especially help widows and women who have been affected by war, and returnees who can't find land. We help them to start businesses and support them until they are able to come out of economic vulnerability. But also on a large scale we have been helping people to recover their land. The refugees who left in 1972 found that their land had been taken either by the Government or by their former neighbours or even other family members. It became very difficult for the second occupants to be able to give back the land to the returnees when they came. So Rema has been standing in solidarity with these thousands of returnees, so that they are able to get back their land and their houses. It hasn't been easy. We've been working with the National Land Commission, which is in charge of the restitution of land to refugees, and trying to advocate and participate in policy formulation and so on. Especially we help those who are destitute, widows and orphans, when they come back to get their land but they don't know how to get it. They have no money to go to court.

We also work in advocacy, advocating the rights of returnees and refugees, at a national level but also in the region. We work with Congolese and Tanzanian NGOs and other organisations, against the abuse that is directed towards refugees, in order to advocate their needs. For example, refugees being kept in refugee camps for decades and not being allowed to work or come out of the camp; being guarded by the army and being condemned to be given food as if they could not cultivate their own; living in the most horrific and difficult conditions almost like animals. We've been trying to engage with our Government to change the laws, the policies, to allow more refugees to get involved in economic activities, to have schooling and access to healthcare and so on. We do advocacy with refugees, helping them to get grass roots associations so they can do advocacy for themselves. Most of us at Rema Burundi have been refugees - it's called Rema Ministries in the book, but now it's changed to Rema Burundi. When God allowed me to go through what I went through, He knew I would be working with refugees and returnees and people who have been displaced because of war, or climate induced displacement. Having lived that kind of life helps me to appreciate the needs of refugees, what they go through and to stand with them. It doesn't become a job, it becomes part of my life and something I want to do for as long as I live.

Emily: Is there a website people can go to find out about your work and the book?

Theo: The book is available on Amazon or directly from me. We have a sister organisation called Rema UK and they have a website where you can find a lot of information on what we do.

The opinions expressed in this article are not necessarily those held by Cross Rhythms. Any expressed views were accurate at the time of publishing but may or may not reflect the views of the individuals concerned at a later date.
About Emily Parker

Emily Parker is from the birthplace of radio, Chelmsford in Essex, and was the first media training student at Cross Rhythms in 2012. After moving back home from Stoke, she is now working in commercial radio in London. Emily is on the Board of Reference for xRhythms alongside her husband Sam and is a part of the CGI network of churches.

View all articles by Emily Parker