What Happens After Death Part 6 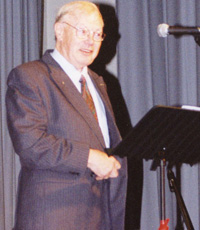 Some religious leaders in Christ's time came to tell Jesus a funny story. They were actually trying to make him look a fool! In the end, they made fools of themselves. They came with a trumped-up story of a woman who had been married seven times.

'Yes,' they said, 'this woman went on marrying one by one, and one by one they died!'

Makes you wonder why, doesn't it! Anyway, they came to the point. It was an imagined difficulty. They asked, 'When she gets to heaven, whose wife shall she be?'

Now I have been asked this question by one who was widowed three times. She was really worried about it. Well, Jesus came straight out with the answer. He knew all about heaven of course. He told them that there was neither male nor female in heaven and no marriage and, he added, 'Don't take it for granted that you will get to heaven.'

Are you saying, 'Oh, I have had such a wonderful married life. All the loving affection, the closeness of two loving personalities, the beauty of doing things together, the deep emotions shared in confidence - I'm sorry if there is no marriage in heaven!'

Wait a minute. The Bible shows that in heaven you get all the advantages of marriage and none of the disadvantages! Now that is different isn't it? Also, you will meet that perfect husband in heaven if he is saved and you will meet that perfect wife if she is saved. Oh, you might say, my partner wasn't all that good. Ah, but he will be in heaven because you are told in 1 John 3 that he will be changed into the lovely character of the Lord Jesus Christ. All those nasty irritating habits will have gone. He will be an absolute saint - and so will you, thank heaven!

There is another thing. There will be a marriage in heaven. Oh yes, a wonderful one for all those who love Jesus and are part of the Church of the saved. You are called the bride of Christ and the next thing you will know after the resurrection is that you will be married to him. Those who have remained single for the sake of Christ will find this makes up for everything. It means that God chooses all the most wonderful delights of marriage to be a spiritual equivalent in our relationship with the Lord Jesus Christ. All the most tender expressions of delight, spiritually, in the Song of Solomon will be yours. 'My beloved spoke and said to me, rise up my love, my fair one and come away.'

What encouraging reports we have had about Christians seeing the glory before they went to be with Christ. We have seen that although people avoid talking about death, when asked secretly, most want to know what happens to them after death. We have read reports and excerpts from readers' letters. They have told us of many cases in which the believer has seen the Lord. This was just before going to be with Christ. Now there is the vital question, does everybody go to a happy heaven when they die? Sadly, the answer is no.

A neighbour whom I had known from a small child was an atheist. He hated all Christians. When he was dying he was fighting the devil. It was very upsetting for his family. His wife did not dare go back into the house to sleep for a long time afterwards.

What a contrast that is to the death of a believer - another listener writes, 'When my grandfather was dying he said, "There is the Lord, can't you see him? Oh, he is beautiful, he is beckoning for me." With that remark, Granddad passed into his presence.'