My Reason For Hope 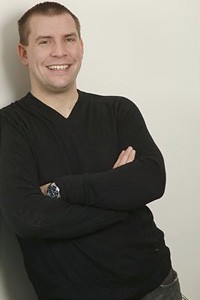 It was a while ago now that Andrew Swift approached me saying that he was compiling a new book 'My Reason For Hope'. The book would feature the testimonies of Christians and how their lives had been changed by God. I had known Andrew since he was a child in my church in Leeds so I contributed my reason for hope to the book. The next thing to do would be to invite him onto my radio show to talk about the book and why he had put it together.

Andrew enters the live studio all smiles and sits down and positions himself. There are two microphones between us and a lot of years. He is quick to point out that he is not an author and laughs, "I did write something actually, so maybe you could call me an author. I did write the introduction and the last section. But most of it was written by other people. That's the best way to get a book out. Get somebody else to write it."

And so our conversation unfolds.

Mike: Where did you get the idea from?

Andrew: Well it's quite a strange one because - I failed my GCSE English. In fact I'm more qualified at French than at English. I'm not really a writer but in April 2007 I had three nights of interrupted sleep. Around one o'clock every night for three nights I woke up with quite sharp pains I thought was in my heart. For three nights in a row I got these pains. I got up, I went downstairs and for an hour I basically sat in the dark; and over a course of three nights I had this dream of writing this book. And I felt it was God saying you need to write the book; you need to get people's reason for hope. On the third night I actually called my wife and said I think I need to go to the hospital to find out what was wrong with my heart. Got there. They put me on an ECG - nothing wrong with me at all. So I really do think it was a God inspired moment of inspiration to write it.

Mike: When you were dreaming about writing a book what were you dreaming?

Mike: What did you do next?

Andrew: Well of course I am quite an insular person. I didn't know anybody really in this book, apart from you Mike and a few other people. But my social circles were quite tight being a Yorkshire man living down South; I really didn't know anybody. And so I called on my friend Andy Frost who does know a lot of people. A lot of people may know Andy Frost from Share Jesus International. People will know his Dad Rob Frost. He had a circle of friends and contacts that was invaluable. And so I called Andy and said to him, will you help me; and his first reaction was yes. This is a good thing. He also actually wrote the forward in the book. So he put me in contact with loads of people. Bobby Ball, Baroness Cox. He seems to know everybody. This guy is good.

Mike: Did everybody you ask agree to do it?

Andrew: Yeh. It's quite amazing in fact I think there was only three or four people out of maybe the forty people I called who actually said no they wouldn't do it. Most people were really really good. What really surprised me were the MPs and people in public service who actually were prepared to do it. Anne Widdicombe called me on the mobile. Baroness Cox she called me on the mobile. I was really surprised when I got calls from these people. Because these are people you see on the news, in Parliament. And they gave me a call and said Hi it's Anne. Anne who - was my reaction.

Mike: Is Anne Widdicombe as scary on the phone as she appears to be on television?

Andrew: Well she's like your Grandmother really I mean she of course comes with authority and passion, but she's very accessible. I liked her. Anne Widdicombe, she talks about an experience she has in Africa and a particular person who really changed her life. As does Baroness Cox. And then we've got Bobby Ball who wrote like two words. It's typical isn't it - well he's from Lancashire. He has a very northern way of coming across - just to the point.

Mike: You have to get Cliff Richard. So how did Cliff respond?