Prayers That Make An Impact

Debra Green shares how you can link with others across your locality to pray and see God change your community. 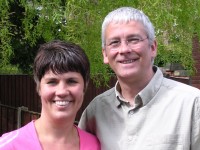 Frank and Debra Green have written the book 'City Changing Prayer' where they describe the journey of how they implemented radical prayer initiatives and joined forces with other ministries that wanted to impact the Manchester area. It seems that praying has never been so exciting! Debra answered a few searching questions from Mike Rimmer.

If we're honest, a lot of people find prayer meetings a bit dull and people do seem to find it hard to pray in groups, why do you think that is?

It's hard for me to answer why Christians find it hard to pray in groups because I personally love praying in groups and find it easier than on my own. But I imagine it might be fear of what others might think or negative comparisons. It may be that others pray prayers which are too long and I can't get a word in or there is a conflict of prayer styles. It could even be that some people are just being shy and things like that.

There are lots of good resources out there for example a new book by Phil Togwell 'Prayerworks' which is a partnership between 24-7 prayer & Faithworks.

When it comes to city wide prayer events, do you think that at the grass roots of churches people want to get together more than church leaders?

In some ways I think this is true. Church members feel less territorial than church leaders. I remember when Ed Silvoso first came to Manchester in the mid- 1990's and said "there is only one church in Manchester with many congregations", I feel sure that some of the leaders present struggled to really accept that. I think that we leaders are afraid that unity might cause some church hopping! Anyway, the church leaders in Manchester have certainly moved a long way from how it used to be and we now see huge benefits in working together especially after the experience of Festival Manchester!

When God started you on the journey you describe in your book a decade ago, did you think it would be like this in 2006?

Actually we did but we didn't see everything in full detail. However, we wrote this in 1995 "Our desire is to see the spiritual atmosphere in the region transformed. In our dreams and visions we can see crime rates dropping, violence decreasing, drug dealers disappearing, prostitution declining and apathy diminishing. We can see businesses booming, housing improving, schools flourishing and hope increasing. We can see other cities all across the UK and the world looking in astonishment at the overwhelming evidence of the illuminating and seasoning effect of the Kingdom of God." This is pretty close to what we have seen!!

Looking at Manchester, isn't it easier to be successful in that city when you have other radical initiatives. What about other cities who don't have visionaries like Andy Hawthorne?

First let me say that this is a very good question. Andy Hawthorne is certainly one of the most significant contributors to what God has done in our city & region. I am a great believer that God anoints men & women for special assignments. Having said that, Andy was not always a mega being! He has grown in faith & stature over the last 15 years. He personally credits the prayer movement as the key to what God has done. God anoints evangelists more when people pray!! There is not another Andy Hawthorne but there are plenty of anointed evangelists being raised up and I believe a new breed of evangelist is about to emerge. I know some of them! So every city has the potential to see the Kingdom of God advancing in the way we have!

What would you say are five keys to establishing a prayer movement in a city that will make a big impact?

The five most important keys to city-changing prayer are:

What about the future? What is exciting you at the moment?

I am very excited about May 13th at the NEC!! We will be launching Redeeming Our Communities as a national initiative and expect 10,000 people from across the UK to come and pray!! I just love large prayer meetings!! I believe that we will see communities transformed and crime rates falling as a result of this day and what happens afterwards when people go home fired up and ready for action!!

View all articles by Mike Rimmer

hi was looking for some input as am having my ladies prayer breakfast this saturday and came across your article, it is great, thanks