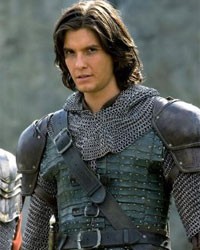 Prince Caspian has always been the least interesting of CS Lewis' Narnia series. Essentially, it's the one you have to read to get to The Voyage of the Dawn Treader - a much more exciting novel. However, director Adam Adamson has used this to his advantage by making significant improvements to the story and reshaping its dramatic structure. As a result, Prince Caspian the film is a more satisfying experience than its predecessor, even though The Lion, the Witch and the Wardrobe was a much better book. It's a curious trend, and one that is shared by the Harry Potter series (Order of the Phoenix was the least interesting of the books, but is so far the best of the films).

For those unfamiliar with the plot, some 1300 years have passed in Narnia since the events of The Lion, the Witch and the Wardrobe. The Telmarines, a group of humans, have taken control of Narnia and banished all the magical creatures into exile. Prince Caspian, true heir to the throne, is almost killed by his usurping Uncle Miraz and forced to flee into the forests, whereupon he discovers the dwarfs, talking animals etc he had been brought up to believe were extinct. In a moment of desperation, he summons the Pevensie children - Peter, Susan, Edmund and Lucy - back to Narnia (only one year has passed in our world) via Susan's magic horn from the previous story.

The early Harry Potter films were hamstrung by an over earnestness to follow the books precisely, but thankfully Andrew Adamson doesn't make the same mistake with the Narnia films. Almost all of the changes he has made to the plot make the story better. Most significantly, instead of being a child as in the books, Caspian is a young man. Character motivations are more fleshed out, including a believable rivalry that develops between Peter and Caspian. Less believable is a poorly judged romantic subplot between Caspian and Susan, but that's a minor nit.

The Pevensie children - Georgie Henley, Skandar Keynes, William Moseley and Anna Popplewell as Lucy, Edmund, Peter and Susan respectively - all contribute decent performances, but only Henley's excellent Lucy really stands out. Newcomer Ben Barnes does fairly well in the lead, and on the basis of this I look forward to seeing him in the Dawn Treader film next summer. However, Sergio Castellitto's Miraz lacks the necessary menace to make a truly memorable villain like the White Witch. Elsewhere Peter Dinklage and Warwick Davies provide good support as dwarves Trumpkin and Nikabrik respectively. Davies' appearances in films like this are inevitable and welcome. Those with long memories will also remember he played warrior mouse Reepicheep in the BBC TV version. Incidentally, Eddie Izzard does a decent job of voicing Reepicheep in this version.

Also worth mentioning are Damian Alcazar, Simon Andreu, Predrag Bjelac, Peter Bowles, and Juan Diego Montoya Garcia as various Telmarine dignitaries and generals whose political intrigues and backstabbing provide an interesting diversion for older audience members. Rounding out the cast, are Ken Stott, who makes a decent fist of Trufflehunter the Badger, and Cornell John who brings the appropriate gravitas to centaur Glenstorm (described by the filmmakers in a particularly absurd fit of political correctness as an "African Narnian"). Finally, Liam Neeson has a welcome but brief return vocal appearance as Aslan the Lion.

The action set pieces are all good, and occasionally even outstanding - especially the Lord of the Rings-esque battle sequences, one which involves Ent-like trees. Another excellent sequence details an ill-conceived night attack on Miraz's castle. Best of all is a stunning, all too brief sequence where a hag, werewolf and renegade dwarf lure Caspian into summoning the White Witch back from beyond the grave. The special effects compliment these scenes well and are certainly an improvement on the first film. Also improved is the cinematography, which uses beautiful New Zealand locations to splendid effect. Even Harry Gregson-Williams' music score has improved.

The Narnia books are all spiritual allegories, and here the allegory seems to be something vague about the restoration of true faith after a perversion, possibly referring to the reformation. Less vague are strong lessons about crisis of faith and how arrogance can cause us to fight battles that require divine intervention in our own strength. Most interestingly, there is an understated but clear condemnation of using sorcery, even if only as a means to an end, which should please Christians who have issues with a certain Mr Potter. Other traditional virtues such as courage, loyalty, honour and standing against evil are all extolled, so there's plenty to praise from a moral perspective.

Overall, Prince Caspian is a darker, tougher ride, but it's also more humorous than its predecessor (one priceless moment involving Reepicheep in particular). Families of all ages will enjoy this, especially children, and although it's not a monumental, groundbreaking work like The Lord of the Rings, I would argue it is actually better than the book on which it is based.

Simon Dillon was born the year Steven Spielberg made moviegoers terrified of sharks. He attended University in Southampton to read Media Studies (for his sins). Here he wrote and directed a number of short films. A few months later he managed to muddle his way into television where he still works today. On the side, he has written a few novels, including Children of the Folded Valley and Spectre of Springwell Forest. In addition to this, he writes film reviews with a Christian slant, which, in his own words, âdo not count every f-word and mini-skirt, but instead try to unpack the overall message â good or bad â that the film containsâ. Simon has tremendous passion to see film used as creative evangelism.

My daughter (aged 7) loves the Narnia books and has read and re-read each of them several times. We enjoyed the first film and my wife and I (who viewed it prior to me taking my daughter) were impressed by the directors touch in making it child friendly (eg the camera turning away at moments of violence in the battles, or worries being quickly resolved so there was no suspended menace). I thought the second film would be similar and so did not view it prior to taking my daughter. Unfortunately it was not as sensitively done with some quite fierce battles and dark scenes meaning that we had to leave the cinema on a couple of occasions (at my daughters request) due to this. Suggest parents preview it first or take older children. Also beware the trailers (we had Batman being advertised which was just far too dark for little ones to watch) - suggest you arrive later!

Interesting review: thank you. I have not yet seen the film (waiting for a rainy afternoon is the school holidays) but Caspian is one of my favourites of the seven chronicles and I particularly like the story within a story technique so I am sorry (but not surprised) to hear that this has gone. Is "Prince Caspian" an allegory? I do not see it as such although there is some clear teaching about the difficulty of believng when no one else does (e.g., Caspian believes in Old Narnia. Trufflehunter believes in Aslan, Lucy can see Aslan when no one else can, etc.) I am still looking forward to seeing for myself.