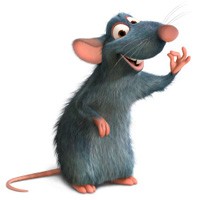 The end credits of Ratatouille proudly announce that "no motion capture or other short cuts were used in the making of this film. 100 per cent guaranteed real animation." One can entirely understand why those involved in the production would want to announce this. Mere superlatives have long since been inadequate when describing the insanely high standard of Pixar's animation, and Ratatouille's technical merits are so astounding that one wonders if they are somehow cheating.

Pixar were worried about how the film was shaping up, so Brad Bird was called upon to lick it into shape. Bird (who directed my favourite Pixar film The Incredibles, and my favourite animated film of all time The Iron Giant) is so revered in the animation world that the studio clearly hoped that the harnessing of his phenomenal skills could result in the alchemy that sometimes turns lead into gold. In this case, their hopes were not in vain.

Remy is a young rat living in the French countryside who dreams of being a gourmet chef. His father and brother do not understand his curious ambition, and discourage it. But when the rat colony is forced to suddenly flee, Remy is left alone in the centre of Paris next to the restaurant founded by his now-deceased cooking idol. After sneaking into the restaurant to get a closer look at gourmet cooking, a series of bizarre and hilarious events ensue, the upshot of which is that Remy makes an unusual alliance with the restaurant's new garbage boy Linguini, who wants to cook but can't. Remy, who it transpires is a naturally gifted chef, agrees to help him by pulling on his hair and operating him like a puppet to help fulfil his ambition. The witty screenplay explores this absurd idea to superb effect, and somehow manages to not only make it work but make it brilliant.

As I've already mentioned, the mind-boggling attention to detail is reason alone to make this a must-see. From autumnal French countryside to dark gurgling sewers and beautiful Paris cityscapes, every detail is so visually astounding that one cannot help wondering if the Pixar animators suffer from some kind of obsessive compulsive disorder in their continual determination to excel themselves.

On top of this, the vocal talents are excellent - Patton Oswalt, Ian Holm, Brian Dennehy, Lou Romano, Brad Garrett, and Janeane Garofalo are all outstanding in their various roles. But by far the most interesting character in Ratatouille is cynical acid-penned restaurant critic Anton Ego, superbly voiced by Peter O'Toole. One scene involving his character is a profound, disarming, and surprisingly moving exploration of how taste can be inextricably entwined with a specific time and place, causing those eating to relieve past experiences and recall long lost innocence. As an aside, I couldn't help wondering if Ego was created in response to the critical reception received by the previous Pixar film, Cars. Personally, I thought Cars was superb, but like Anton Ego, many critics inexplicably knocked off a star or two (so to speak) in their reviews. However, I can almost guarantee that star will be back for Ratatouille.

The film doesn't just have things to say about food and critics. Familiar but worthy messages about being true to oneself, friendship, loyalty, ambition, the price of fame and prejudice are explored in pleasingly subtle fashion. One understated but hugely effective scene has Remy's father showing him a shop window filled with rat poison and traps in an effort to dissuade him from associating with humans. Remy however refuses to accept life will always be that way, and wants to change things.

If that makes Ratatouille sound heavy, nothing could be further from the truth. It's light as a feather, frequently hilarious, and contains several superbly exciting set pieces reminiscent of Chuck Jones or Tex Avery cartoons. Remy dodges coming to a nasty end many times inside the restaurant and the film ingeniously shows what potential death traps kitchens are for rats. Chases also spill out onto the Parisian streets and even into the Seine (in one particularly hysterical subplot involving a jealous chef who is determined to catch Remy). One scene where the rats come together at the end to help Remy prepare the eponymous Ratatouille is such a delightful, surreal, whimsical sequence that its narrative implausibility (even allowing for suspension of disbelief) becomes an irrelevance.

To sum up, Ratatouille is easily the best family film of the year, not to mention Pixar's most technically proficient work yet, and confirms Brad Bird's emerging reputation as the Steven Spielberg of animation. Please, please go and see it at the cinema, as the beautiful use of widescreen will inevitably suffer on television. It only remains for me to warn parents that your children may well demand pet rats after watching this. As the RSPCA would say, a rat is not just for Christmas.

One final thing: don't arrive late and miss Lifted, the sublime cartoon before the main feature. It's the funniest Pixar short film to date.

Great review - My girlfriend dragged me to see this kicking and screaming, but it turned out it was brilliant!

Such a great film, watched it at the cinema at the weekend, loved it!

Good review: thank you. My nine-year old daughter and I went to see this film as our half term treat. At the end, the audience applauded. I can't remember the last time that happened.