We ask students from Devon's rehabilitation centre Gilead Foundations to tell us their stories. This time it's the turn of EDWARD BOAST. 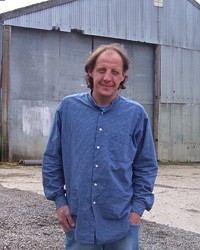 I was born in Kent where I had a normal sort of family upbringing. However, when I was still quite young, my father died. My mother then re-married but there was a problem because I didn't get on with my step father. Consequently I rebelled quite a lot and I began thieving and playing truant. I started getting in with the wrong crowds doing gas and glue sniffing. That led into small crime like shop-lifting. Through my teenage years I got pretty uncontrollable until an older member of my family took me under their wing and got me an apprenticeship. I began to earn money, but at the same time I also got in with another crowd of drinkers. I started drinking heavily and, through drink and drugs, I was involved in an untold amount of criminal activities. I ended up in prison twice for short sentences. I was lucky not to go to prison on many other occasions. I was always given a chance. But, with every chance I was given, I messed up. My family totally disowned me. They still do. There's only one member of my family that I speak to now. The rest of them just don't want to know me and it fills me with a lot of regret in everything I've done to them.

I'd been homeless and living on and off the streets for years when things started to change for me. I ended up in a place called Bridport in Dorset where I was sleeping rough. I was in a really bad way with one thing and another and was just so alone. On one particular day in August last year I was sitting on a bench in a square and there were some street evangelists nearby who were giving pamphlets out. I was compelled at first to get up off the bench and walk away. But something just stuck me to the chair and I had a feeling of something saying to me, "Stop running Ed. You can't run anymore. You've been running too long. Stop." That was a complete revelation to be told in the heart to stop running from everything. So I listened to what they said. One of them invited me to go to a prayer meeting because I could get something to eat there. They took me under their wing and provided me with some accommodation and a job to sort myself out. It was great, but then I relapsed. I was scared more than anything and thought, "Why do I deserve this help? If they knew what I have been like and done then they wouldn't touch me with a barge pole." But they persevered with me and decided the best thing for me was to go to Gilead. They sponsored me to be there, which is the best thing that's happened to me in my life.

By the grace of God I can see a lot more potential in myself, and I've found a lot of understanding about why I take drugs. It's really just to suppress everything that's happened to me and to forget the things that I've done. I'm being taught to release these things, which is hard, but it's something that has to be done. I wouldn't say its up hill all the way, I mean, there are stumbling blocks on my walk still in order to get to the root of the problem.

In regards to my family, my belief is that God has shown me the way when it comes to them, and it all takes time. I'm not trying to prove anything to them, but to myself, and I hope they can see me doing OK. I've spent eight months here now and that's the longest time I have ever spent dry and clean from drugs and alcohol. That's in my life. In 22 years. So I just hope that they see it's a real effort on my part to change this time.

At the moment my plans are in their early stages because I believe I'm still in recovery. So, I'm just going to let the Lord direct my path and I'm sure he will tell me in his time what he wants for me.

Hay Eddie hope your doing fine would really like to catch up some day, your friend johnny (much love)

Hello Eddie it's johnny beeken, I've been looking for you on the Internet for a bit know,I hope you get to read this Its November 2012 and I see that this was back in July 2007.I hope your still doing well Eddie, still think of the good times :-) still worrie wear you are and if your okay all my love Eddie

Hi Eddy,
Its been a long time since I saw you But I hope that you have turned your life around?
I can remember many good times we all had when we were kids, I hope you are still clean and dry?
It is now 2011, I would like to think you are over your passed events and looking forward to a wonderful future.
best wishes
David