We ask students from Devon's rehabilitation centre Gilead Foundations to tell us their stories. This time it's the turn of GAVIN HUNTER. 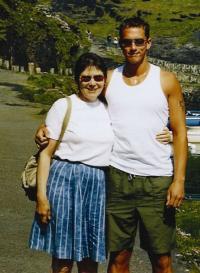 I am 27 years old and I grew up in West Yorkshire. Mum is a strong Jehovah's Witness and Dad is a strong atheist, and I had a fairly stable upbringing. I struggled till I was 12 or 13 with their conflicting beliefs. Then I gave up and rebelled. I had never felt like I belonged or fit in - I didn't feel like I should be here in the world full stop. I started smoking cannabis and taking LSD and I went from being a fairly good student to just getting off my head all the time. But I had a group of "cool" friends and I belonged and was accepted. My aim in life was to be a party animal - Jim Morrisson and others were my idols, and a self-destructive life was cool.

When I left school I got into clubbing and the drugs that go with it. I developed psychosis and began to be unable to cope, but I did not want to give up the lifestyle. Then someone gave me some heroin to smoke when I was coming down one night, and it did the trick for me. I used heroin regularly for coming down, but it grew to be a habit on its own and then I started injecting, till in the end all I was doing was going to work and taking heroin. I spent the next three years doing detox's, failing, doing them again. In the end I went to Gilead and stayed for eight months, and got clean. But I rejected all the God stuff. When I left Gilead I stayed clean, got a good job and settled down but still felt I had no purpose and life was futile. So I relapsed again and became quite suicidal.

I returned to Gilead in 2003 and realised I had tried every thing except God and, as a last straw, I prayed and gave God a go. It was a last ditch attempt, everything else had failed to cure the purposeless, futile, suicidal feelings I had. Nothing really dramatic happened, but gradually as I read the Bible I began to find I had a purpose and a reason to live - and that's to serve God. The hardest thing I found was to have faith that it is all true, because of the depression I suffered with. I started with a tiny morsel of faith, which has gradually grown. Now I have a purpose and a life ahead. I've worked on the farm, and now I'm in the office helping new applicants to come into Gilead. I want to get involved in social work, helping people, whether that's at Gilead or elsewhere. I may still be prone to occasional depression - it's more how I handle it now that's different. And some of the root issues that caused that are being healed, too. Mum and Dad are really pleased, even if they do not fully agree with my faith.

If I met someone in the same place I was in, I would say they need to look to God and ask him for help first - if they do, he will put that help in their lives, and the people to help them.

God bless u. thank u for sharing. God's word is always our way out. And our comfort, my comfort is always in knowing that I have liberty to tell him everything becos he 1st loved us and told us everything thru the Bible - the words of God. pride is a terrible thing. I believe you are God's seed of love. As you read and feed your spirit, body and soul with the Spirit of God, God will use your effort to transform you. you are the result of many years of seeking, now youhave found, it is your time to transform our world daily. This transformation will start and continue to occur within yourself then spread outwards from within you. You are loved by the body of christ and you always have a home here. Bless you Bro.

Well done! I hope you've grown stronger in your Faith as it's bee a while since your testimony...God IS the only way. I have a similar testimony and I've been clean from heroin for 18years now! Hanging on to Jesus and using Him as my role model in everything has kept me sane. Plead the blood of Jesus and the mind of Christ when you feel down and you will see and feel a huge difference! Praise God! oh, and don't try going back to "lighter drugs even if you feel you've overcome..they're a sure way of letting Satan grab hold of you again. Just stay away from everything!
No need for artificial fixes...Jesus is the ultimate and the Holy Spirit the most awesome of all!God Bless You..pray for your family too...xx

That's a really awesome testimony, Jesus IS the Way the Truth and the Life.