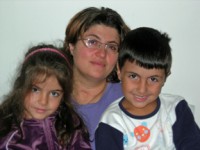 One Sunday night on the way home from church, a sad little voice came from the back seat of the car. "Mummy, I miss my Daddy so much. Can't Jesus bring him back to us?" Her mother sighed, and then turned from the front seat to explain gently once more to her 6-year-old daughter, "Esther, Jesus decided to take Daddy to heaven, to be with Him. So we have to wait until Jesus takes us to heaven to see Daddy again." The little girl thought for a few seconds and then declared, "Well, if Daddy isn't coming back, then I want to go to heaven too!"

Just over seven months have passed since Esther Aydin's father was beaten, tortured and then killed with a knife in Turkey's eastern city of Malatya by five young Muslims who claimed in initial statements they had done it "for our religion." But Esther and her brother Elisha, 7, are still struggling painfully with the loss of their father, Necati Aydin, who died on April 18 with another Turkish Christian, Ugur Yuksel, and German Christian Tilmann Geske. They were bound hand and foot, tortured with multiple stab wounds and had their throats cut.

As their mother put them to bed one night last week, Elisha finally asked, "Mommy, are you crying about Daddy?" Admitting it had been hard for her to cry since his death, his mother told him, "I am crying in my heart every day, Elisha." Bravely trying to comfort her, Elisha answered, "You don't need to cry, Mommy. We know he is in heaven with Jesus, along with Uncle Ugur and Uncle Tilmann." But a few nights later, as he again dissolved in a flood of tears, he sobbed out his own fears to her, admitting he was terrified that she might die, too.

The draining process of returning to Malatya in early September to pack up and move from their former home was like "a knife to my heart," she said. "It was as painful as death itself to close that chapter of my life." "Without Necati, I feel like I don't have a home anymore. I can't feel like this is really my home now, because he's not here."

Despite the personal cost of her pain, Semse stands by her public statement to the Turkish media two days after her husband's death, declaring that she has forgiven the five culprits, now jailed and awaiting trial. Semse's story throws down a challenge to us: let's set out to imitate her example. Let's love people the way Jesus showed us, with a love that doesn't shy away from difficult truths or deal with people as stereotypes, but that keeps no record of wrongs and always perseveres, no matter how hard it seems.