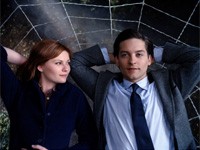 Is it possible to have too much of a good thing? In the case of Spider-Man 3, the answer is emphatically yes. There are not one but three potentially excellent films all vying for attention here, and given the number of plotlines, at times I wondered if it was Robert Altman, not Sam Raimi, who directed this instalment of the arachnophile franchise. That said Spider-Man 3 is not a disaster. As a comic book "threequel" it's nowhere near as bad as - say - Batman Forever, and it's certainly worth seeing if you're a fan of the first two movies.

The reason this feels like three films in one is because it has three villains. Contrary to what some critics think, the three villains thing can sometimes work in comic book films (Superman II for instance), but only where their motivations are unified. Here, the Sandman, Venom and the new Green Goblin each have radically different back-stories, each of which are explored as much as the overlong running time will allow. And that is the problem - each of them ought to have had separate films.

The film opens with Peter Parker feeling on top of the world. His studies are going well. Spider-Man is more popular than ever. His relationship with Mary Jane is blossoming, and he is planning to propose. However, this idyll is soon shattered by the escape of convict Marko Flint who it transpires was responsible for the shooting of Peter's Uncle Ben. Flint is desperate to steal money that will help his sick daughter, but whilst on the run from police ends up trapped on a test site for some unexplained barmy scientific experiment (don't you just hate it when that happens?) The resultant exposure causes Flint to mutate into the Sandman.

At the same time, Harry Osborn decides to take his revenge on Peter for the death of his father, and becomes the new Green Goblin. He attacks Peter, but after their fight, he sustains an amnesia inducing injury that makes him forget his feud with Spider-Man. This conveniently sidelines Harry's character until an appropriately convenient lull in the plot is contrived for him to suddenly remember everything. 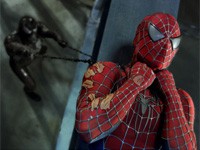 Whilst all this is happening, Mary Jane's career as an actress takes a downward turn, as she receives bad reviews for her play. Because Peter is too busy enjoying the popularity of Spider-Man, he is unable to properly understand her feelings and be there for her, which causes their relationship to take a downward spiral. This comes to a head when Peter shows an interest in his class-mate Gwen, and jealousy rears its ugly head. Incidentally, Gwen is going out with Eddie Brock, Peter's rival photographer at the Daily Bugle. Through events too convoluted to go into in this review, their competition soon escalates into all out enmity.

Oh, and a meteor crashes, bringing with it a sticky black alien symbiote that attaches itself like a cancer to Peter, forming a new, black Spider-Man outfit that enhances his powers, but also brings out his darker side. I hope you're following this because as you can see, it's very densely plotted, and I said earlier, too densely. Spider-Man 3 has so much story to tell, and so many loose ends that it feels it must tie up that one longs for the beautiful simplicity of the first film (or even the second, which was almost as good). Here however, the law of diminishing returns has well and truly taken effect.

As Spider-Man, Toby Maguire is as brilliant as ever, and it is now very hard to imagine anyone else in the role. Kirsten Dunst doesn't seem quite as radiant as she was in previous films, but that is primarily due to the complicated nature of the story. As far as the major villains go, Topher Grace is effective as Brock, though is not given enough screen time to be truly memorable. Thomas Haden Church's Sandman fares better, but again, we don't see enough of him. For my money, the most interesting baddie is the new Green Goblin (the excellent James Franco), but because the film keeps cutting away to the other stories, his tragic character arc fails to gain the momentum it needs.

Elsewhere, JK Simmons makes Peter's boss JJ as amusingly belligerent as ever. Dylan Baker lurks in the background as Dr Curt Conners (it's surely now only a matter of time before we see a Spider-Man film with Conners becoming the Lizard Man). Bryce Howard Dallas is good but unremarkable as Gwen. Rosemary Harris provides the requisite moral/spiritual guidance as Aunt May, and the excellent James Cromwell has an utterly throwaway role as police Captain Stacy, Gwen's father. There are also amusing cameos from Stan Lee and Bruce Campbell (who starred in Raimi's Evil Dead trilogy).

The big action set-pieces vary in quality from a hard-to-follow opening duel between Peter and Harry, to an absolutely superb must-see-on-the-big-screen malfunctioning crane rescue sequence that is worth the price of admission alone. Special effects are very good, as are the (very loud) sound effects. Danny Elfman's now familiar music score is as effective as ever, and Sam Raimi's directorial flair keeps the camera hurtling from one object to another at breakneck speed. 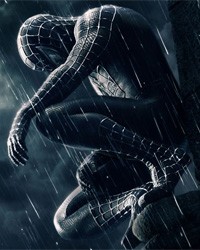 From a Christian perspective, there is a veritable feast of spiritual food for thought. For a start, the Venom symbiote is not only a superb picture of the corrupting power of sin, but more interestingly takes on different forms of sin depending on who it is bonded to. This is a particularly fascinating allegory, since all people are tempted by one form of sin or another. In Peter Parker's case, early in the film it is evident the adulation Spider-Man is getting has overwhelmed him to the point where he is letting it go to his head. For instance in one scene he allows Gwen to kiss him in front of Mary Jane after he has rescued her. These hints at an inflated ego are brought to the fore by the symbiote, and he is transformed into a swaggering, vain character who mooches absurdly along the street like John Travolta in Saturday Night Fever. More seriously, his drive for revenge is enhanced, and he actually wants to kill Marcus Flint instead of simply bringing him to justice.

However, when the symbiote attaches itself to Eddie Brock, Brock's dishonesty and subsequent desire to kill Peter Parker take over, and the temptations and sin that he succumbs to turn him into a full blown villain; Venom. It is made perfectly clear that both Peter Parker and Eddie Brock have a choice. They both find the symbiote powers exhilarating, and, as Brock puts it, "being the bad guy is fun". However, the longer they remain bonded to the symbiote, the harder it is to escape from its corrupting power. It's hardly a spoiler to say that eventually Peter tries to break free, but it is Brock's deliberate decision not to, and it is this choice to overcome temptation that provides the moral heart of Spider-Man 3.

In addition, the films condemnation of revenge and belief in the power of forgiveness is explicitly Christian, and Peter's journey to maturity in this respect is believable and compelling. It's just a shame that there wasn't more time for the individual plots to breathe, and as such the exemplary moral/spiritual messages are packaged in a deeply flawed, if enjoyable summer blockbuster.

hey ... i think that spiderman 3 could of been sooo much better.. it had one of spidermans greatest enmey ..venom, the first to movies were great because in the first 2 it showed how peter strugled through life being 2 different people, there was also that struggle he had to get mary jane which made the movie awsome ... but in number 3 it was all cool for him, number 2 also had a great ending which was when harry found out that peter was spiderman that made me so excitied.. it definetely made me wana watch number 3 to see wat happend but in the end i was disapointed.
keep it real

Hi Simon, hope you're well. Remember me from Abingdon College? I thought Spiderman 3 gave a Peter Parker a good moral maze in which to find himself. Though I confess I'm not a christian (nor an aethiest), I hope many people appreciated the intricate character development which is explored in the latest spidey film. Take care,ed

hi simon,
have you seen psb since then? looking forward to indiana jones no.4.
i'm married now with a baby boy called owen. how're things for you?
ed

Great to hear from you. I don't think I've seen you since that Pet Shop Boys concert we went to in '97?

Anyway, if you see this, I hope you're well.

Unlike the first two films, Spiderman 3 is tediously long and boring, yet somehow chaotic and adrenalin fueled also. Too much adrenalin is not a good thing however and as a result, the movie suffers from too much exposure to too much plot. I would rate it 2 stars out of 5; poor.

I can't believe this! Hi Simon! Looking for a Spider Man review I somehow came across this! Remember summer '94 in Slovakia?