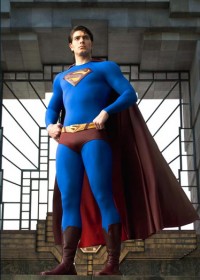 A picture is worth a thousand words, and a negative image, once embedded in the consciousness, can cause all the negative emotions associated with it to recur whenever one is presented with a similar image. Thus, when one sees a plummeting aeroplane near the beginning of Superman Returns, one immediately thinks of 9/11. To then watch Superman save said aircraft is fantasy writing of the highest order, and it is almost impossible to not cheer. "I hope this experience hasn't put you off flying,' Superman says to the rescued passengers. 'It's still statistically the safest way to travel.' In this extraordinary moment, Superman is not only wittily reprising one of his most famous lines from the original 1978 film, but also providing a moment of reassurance and healing for the post-9/11 consciousness of the Western world.

Superman has always been my favourite superhero. There is something about him that makes him the ultimate comic book hero. Perhaps it's his absolute, clear-cut right and wrong morality. Perhaps it's because he's from another planet, instead of becoming a superhero through martial arts training or genetic mutation. Perhaps it's the messianic overtones, but more of that later.

At this point I must add that Superman and Superman II, the films from 1978 and 1980 respectively, are two of my all time favourites. They are a part of my childhood and as such I find it virtually impossible to view Superman Returns objectively, without comparing it to these movies. Thankfully, it appears director Bryan Singer has the same problem. Correctly believing the origin story has been definitively rendered, he treats Superman Returns as a sort of sequel to Superman II (ignoring the inferior III and IV). His reverential treatment of both the Superman legend and more specifically, Richard Donner's version of it work tremendously in his favour, and the resultant movie is a sweeping, dynamic epic; thrilling, emotionally resonant, and chock-full of spiritual and moral food for thought. Its not quite as much fun as the afore-mentioned favourites, opting for a slightly more serious tone, but it is something of a flawed masterpiece nonetheless.

Superman returns to Earth after a mysterious absence of five years and finds the world has moved on. After getting back his former job at the Daily Planet as his alias Clark Kent, he discovers Lois Lane is engaged to Perry White's nephew Richard, has a son called Jason, and has even written a prize winning article about "Why the world doesn't need Superman". And if that wasn't enough, because of his absence, Lex Luthor has been released from prison on a technicality, and is planning another evil scheme using stolen Krypton technology that will wipe out billions.

As Superman, Brandon Routh is a superb successor to Christopher Reeve. He has a unique presence that both pays tribute to Reeve and makes the role his own. The rest of the cast is also excellent. Kate Boswell is too young, but still makes a terrific Lois Lane, Kevin Spacey has great fun as Lex Luthor, and even Marlon Brando makes an important cameo appearance as Jor-El via digital jiggery-pokery, utilizing scenes originally shot for the earlier film. Elsewhere, Eva Marie Saint pops up as Martha Kent; a lovely bit of casting. Sam Huntington and Frank Langella as Jimmy Olsen and Perry White respectively are very good in their limited roles, and James Marsden is enormously impressive as Richard. Finally, there is a "non-annoying kid" role (a rarity in Hollywood) in the form of Jason, played with beautifully understatement by Tristan Lake Leabu.

It's scarcely worth mentioning that on a technical level the film is everything one could hope for, with outstanding special effects, sound and cinematography (especially in the plane crash rescue). John Williams' classic theme, nostalgically set to the original film's silver and blue titles, still makes the hairs on the back of the neck stand to attention. Speaking of music, it's also worth noting that in addition to Williams' themes, the film has an entirely new score composed by regular Bryan Singer collaborator John Ottman, which compliment the original compositions very well.

If you are expecting a typical summer blockbuster with non-stop action, then you had best be warned, Singer's film isn't so much concerned with special effects (though there are enough to keep ones inner 12 year old satisfied), as the poignant love story between Superman and Lois. For the most part, this is a wise move, though I do think the film is a bit too flabby, and the editor could have lost about twenty minutes. Don't expect an action packed climax either. Singer instead opts for an enigmatic, but emotionally satisfying low-key conclusion.

The relationship between Superman and Lois raises all kinds of interesting moral dilemmas, as Superman agonises over his love for her; whether it is better to leave her with Richard; a man he knows will treat her and her son well, or to take the more selfish path. It's the first time Superman's absolute morality has been so sorely tested, and one is reminded of the temptations that a Christian must face and overcome. In addition, the Christ parallels of Superman have never been more obvious, and because Singer makes what was once subtle so blatant, it can no longer be ignored. However, I cannot discuss this properly without revealing a key twist in the story. If you are reading this and have not yet seen the film, I recommend you stop reading, go and see it, then return to this article, as I am about to spoil the ending.

Please do not misinterpret what follows as my suggesting that Superman is somehow unsuitable for Christians. I simply wish to explain why I feel it is important to be wary of Superman Returns as a straight Christ allegory the same way one can with, say, Aslan from the Narnia stories.

The Superman/Christ parallels have always been clear; a father sends his only son to Earth as a saviour with incredible powers to pour out his life in the service of humanity. But in Singer's version, the case for humanity needing a saviour is made more compellingly than ever. I won't go on to bore you with the endless allusions to the Passion story, as I am sure you will spot them yourself, and the imagery is pretty obvious. But for all the spiritual ripples in Superman's muscles, he is still a character who makes mistakes, and unlike Jesus, does not live a perfect life. At the climax of the film, when it is revealed that Jason is in fact his son, the allegory takes on Gnostic gospel overtones if taken to their logical conclusion, with Lois becoming Mary Magdalene, and Jason becoming symbolic of a Christ bloodline.

At this point I am losing some of you. It's only a comic book! Why read that into it? Does it matter? Well, it wouldn't if Singer hadn't made such a big deal out of the Christ allegories, and as it stands, they are impossible to ignore. Therefore, I would say that provided one explains to one's children that Superman is not like Jesus (and I feel this is particularly important with the Da Vinci Code still in the public consciousness), there isn't a major problem. The film is too intense for younger children in any case, but anyone aged about 10 or over would probably be fine with it (depending, obviously, on the temperament of one's children).

As I touched on earlier, the many positive elements of Superman's character are much better likened to that of a Christian attempting to walk in their high calling, and facing the painful sacrifices and severe temptations that are an inevitable feature of such a lifestyle, occasionally failing, but ultimately, with all things working together for good, overcoming. In that context Superman Returns, and its paternal revelations, is exciting, truthful and moving.