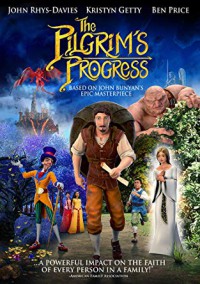 Chris: You may have come across the actor John Rhys Davies in films like Lord of the Rings. He played Gimli in the Trilogy. The veteran also featured in the Indiana Jones films. He's also provided voices to characters in Disney films and even Sponge Bob Square Pants. His latest project sees him in an animated version of the classic adventure Pilgrim's Progress. I spoke to John recently and he told me he's still busy working on many different projects.

John: Oh, yes. Yes, I am. I've done about 2 or 3 little independent films this year. I have my own project and my own studio that I'm trying to set up. And I'm half way through one of three films that will be shot in England and I'm here in Malta at the moment doing Terence Malik's new picture. There's a film to do in Michigan before I depart for New Zealand.

Chris: New Zealand of course is where Lord of the Rings was shot and famously you played the key role in that, portraying Gimli.

John: Well, I'm the most attractive dwarf and possibly the best-known Scottish dwarf of all, I have to say. He's a great character; I love him.

Chris: Of course, that started life as a novel and one of your latest projects started in a similar way, Pilgrim's Progress. You are the voice of the Evangelist, one of the characters in the film, so tell me a bit about that, John, if you would. What drew you to the role?

John: I remember reading Pilgrim's Progress when I was very young. I'd forgotten a bit about it. You understand that probably after Shakespeare and the King James Bible, Pilgrim's Progress may be the most read book in the English language, though I suspect that Tolkien might be up there rivalling him now. But certainly for a couple of hundred years at least everybody who read English read the Pilgrim's Progress. It's rather odd that it should have gone out of our ken, as it were. But it's marvellous to do. It's an animated version; animation has its drawbacks but it does bring people into a story that they may not have heard before and seen before and then it may well send them back to the original.

Chris: Mmm, as you say, the book isn't perhaps as popular as it once was. Tell me about the story and its author, John Bunyan.

John: Bunyan himself was a remarkable man, he was a Bedford man. Bedford was ordered to supply men for Cromwell's army and off he went to war and did the wild things that soldiers did. Then he came back and got attracted to the Non-conformist ministry and he became a preacher. Then there was a point where the law basically said you had to be licensed and only the Church of England could be licensed to preach. He refused to stop and he could have got out by simply saying I won't preach anymore and he kept saying no. His three months ended up as twelve years in prison. He became a well-known evangelist in his own way. He loved telling a simple allegorical story and he found those allegories in the parables that Jesus taught in the bible and Pilgrim's Progress is a wonderful adventure story.

Chris: What do you make of the finished animation of Pilgrim's Progress?

John: I found myself enchanted by it very quickly. It's an endearing piece and I'm proud to have been in it.

Chris: The veteran actor John Rhys Davies is my guest at the moment and he features in a new, animated version of the classic adventure story Pilgrim's Progress. John you mentioned a few moments ago the fact that Pilgrim's progress was written by John Bunyan. He had a very strong Christian faith. I also notice that you voiced two or three translations of the New Testament as well as a feature about the King James Bible. Do you have a Christian faith yourself?

John: I have a deep respect for Christianity in particular. It is an extraordinary faith, unquestionably beneficial. Naturally, as all of us do, I went through the atheist stage and the agnostic stage and I've come to a conviction of the certainty of the existence of God, simply because of my interest in science. If you have enough space and enough time, not only is everything possible but everything becomes probable. In our universe alone it seems we have 2 to 4 billion stars in our galaxy and they may be 2 to 4 billion galaxies and the number of possible universes is 10 to the 10,000th power. Aquinas says God is that than which nothing is greater. What he is trying to do is indicate that there is something that has generated these huge numbers. One of the legitimate questions is to ask why should anything exist? I think that is a legitimate question that cannot be answered by science and yet I think it is. I am obliged to conclude God is a racing certainty. The debate really has to be the nature of God

Chris: Sure. We don't often hear about faith and religious belief from famous people. Not everyone speaks out in the way that you're known to. Do you think it's important to speak about your own convictions?

John: I think one of the glories of Western civilisation is our right of freedom of speech. The origin of that, freedom of speech, comes from freedom of conscience and that developed in the second century A.D. when those who were Christians thought I have the right to believe and speak what I believe to be true, despite what the emperor adjures me to believe and to speak. We've got to keep that alive. A man may tell me something that I find abominable but my response must be to argue with him and to meet it on the grounds of language and intellect and be prepared to be changed by listening if his points are good. We must celebrate that and we must protect it. We mustn't be afraid of putting our heads above the parapet unless, of course, we are malevolently and maliciously maligning other people. That's hate speak and freedom of speech is not about hate speak; freedom of speech must be to consider all things fairly and intellectually and morally, I suppose.

Chris: I think it's dangerous if we are in a situation where we hear something we don't like and get offended too easily. It leads to the point at which the conversation is shut down and that's no good at all.

John: I am a Brexiteer for example; there are good arguments for Brexit. There are also good arguments for remaining. That doesn't make me any less of a Brexiteer but I cannot, I must not regard everyone who opposes Brexit as the enemy, the villain of the piece. I do think there are very strong arguments to be made about the conduct of our political process but in the end we have to learn to live with each other and talk to each other and find our way in a new world together.

Chris: And whatever happens with Brexit that will need to happen in our country.

John: And it can do. In the end, when we see the man is down we stop kicking and we say come on, that's enough now. And that's British and I'm rather proud of that. I meant it metaphorically of course, boys and girls.

John: And to all your listeners think, argue, debate, oppose, healthy controversy. In dispute sometimes there is clarity. I love it. God bless.