On March 6th 2019, John Smith, the 'motorbike riding Rev' from Australia, and founder of Australia's God Squad, passed away after a long battle with prostate and pancreatic cancer. For 27 years, his one minute social and spiritual radio spots have been broadcast, first on the original Cross Rhythms Experience radio show, and then since 1997 on the Cross Rhythms radio stations. Cross Rhythms founder Chris Cole knew John well, and here shares his thoughts on the sad news of his passing. 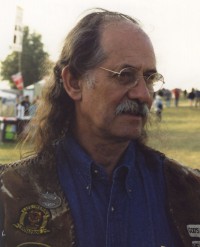 I remember sitting in a large field on a sunny day in August in the early 1990s with a few thousand Greenbelt Festival goers listening to a motor bike riding, leather clad preacher from Australia share the most authentically spiritual and powerful message on personal identity and value and the meaning of life I had ever heard. It was so powerful that we play a recording of this condensed message on Cross Rhythms radio and affiliate stations around the world virtually every day.

Reverend John Smith died in early March this year at the age of 76. He had the opportunity to at least finish a documentary about his incredible life since he had wrestled with cancer for almost 19 years. As with anything about his life he was a fighter, not for self, but for others. On the occasional times we connected they were always life changing and inspiring for me.

His most famous book was called 'On the side of the Angels' and he was regarded as the pastor of many outlaw motorbike riding clubs including the Melbourne Chapter of the Hell's Angels. He would bury and marry their members; from these folks - considered by many to be on the margins of society - he gained a grudging respect because he 'walked the talk'.

John started his ministry in the sixties and seventies which some have considered the most culturally diverse and challenging decades of the last century in the western world. They used to say that you could tell if you were a child of the swinging sixties, because if you were there, you probably couldn't remember it. In other words, for many, it was a crazy time.

He was a product of the phenomenon known as the Jesus People Movement revival of the sixties and seventies which birthed the different genres of contemporary and worship music you can listen to on our radio stations and online today. However, John came from a completely different background. He was very conservative and a school teacher, but a teacher with a great deal of compassion. The story is too complex for this article, but he ended up, motivated by love of Jesus Christ ministering to the outlaw communities as Jesus had done with the lepers of His day in Israel.

John and his wife Glena have left a legacy which will grow and grow because it wasn't initiated by them, but their love of Christ. Like ripples in a pond their spiritual influence will continue to grow, flourish and bear much fruit as does the Kingdom of God, which is described in the biblical book of Isaiah:
"For unto us a child is born, unto us a son is given, and the government will be upon His shoulders. And He will be called Wonderful Counsellor, Mighty God, Everlasting Father, Prince of Peace. Of the increase of His government and peace there will be no end. He will reign on the throne of David and over his kingdom, to establish and sustain it with justice and righteousness from that time and forevermore. The zeal of the LORD of Hosts will accomplish this."

John is at peace now. He has run a faithful race. He didn't do it in an attitude of self-righteousness, but in acknowledgement that his life was undergirded and led through the grace and genuine love of His saviour, Jesus Christ. When you listen to our programmes and you hear his voice, know that John, deep within his heart, 'walked the talk'.

I know what Chris means...I wasn't even there, at the Greenbelt Festival in 1989 but I later heard the tapes of a couple of John Smith's talks and they were life-changing...I can still remember the fire of the Holy Spirit stoking up in me, tangibly, as I listened to the cassettes, which I still have. Later on, I would hear his short reflections on the Cross Rhythms' Experience and also read others at the back of each copy of the magazine. At a time when Christians hang on every word of the latest prosperity teacher to come from the USA, John Smith was the real thing...however, I can keep reading his books and re-live his seminars on the recordings, for the rest of my days. Or I can step out in faith and try and imitate Jesus in all I say and do, in this life. I know which option Smithy would have us follow...