Why Do You Trick Or Treat Up Your Street? 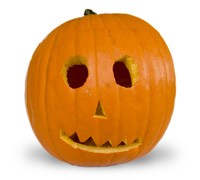 A young and newly married woman was preparing for her first romantic dinner with her husband in their new home. The wife was going to make a wonderful family recipe for roast leg of lamb. She instructed her husband to buy the leg of lamb on his way home from work and to ensure that the butcher cut through the bone in the leg, so that it was able to fold back on itself. The husband thought it strange, but never commented. This ritual continued over the years, each time they had a leg of lamb. One day, the husband couldn't contain himself any longer, and asked his wife why she always insisted the leg be cut through. She looked at him with round, wide eyes, and said to him, "I've never thought about it. My mother always did it that way!" "So, why did she do it?" the husband asked. The young wife couldn't answer, so they decided to investigate further. The mother couldn't say why she had done it, except to say it was something her mother had always done and perhaps they should ask her why. So, like Red Riding Hood, they all went to visit Grandma to ask her why she always cut the lamb's leg before cooking it. "Oh, that's easy to answer; it wouldn't fit into my roasting pan any other way!"

Do we continue to do things simply because it is something that is always done, or do we ever stop and ask ourselves why we do them? Today, I want to ask why you trick or treat up your street on October 31st. Why you celebrate or participate in Halloween? What is your motivation for doing that?

Halloween is an annual celebration, the history of which can be traced back 2000 years. In ancient times, the Celts celebrated the beginning of winter on the evening of October 31st. November 1st was then the first day of winter as well as the first day of their new year. They believed that the dead and the living roamed the earth simultaneously on the evening of this day. However, pagan and religious beliefs became intermingled over the years, as the Catholic Church observe November 1st as "All Saints Day", a day of honouring dead saints.

The custom of Halloween was brought to America by the Irish immigrants fleeing their nation's potato famine in the 1840's. Today in America and, steadily growing in popularity around the world, it is traditional to celebrate the holiday by throwing parties with guests dressing up in ghoulish and ghostly costumes. In fact, this holiday is the second greatest generator of income for many stores.

The custom of trick or treat has its history interwoven with so many possible beginnings, such as, poor citizens begging for food, or druids collecting food for the winter and, if no food was given, the house would be cursed. Others say religious people would go door to door begging for 'soul food'. On receiving food, a promise for prayers to be said on behalf of the donor's dead relatives would be made. On and on go the explanations.

As I have researched Halloween, I have discovered three different expressed positions and opinions:

Position 1: There are those who see Halloween as an opportunity to have a massive party - wine, women and song, as well as some mischief being the order of the day. They are unconcerned about the history of Halloween and being disguised in a costume gives them license to be whatever they like and get up to all sorts of debased activities, without a hint of conscience. The next morning, the night before is just a blur and, if they can't remember the night before, it must have been a 'hell' of a party. They just don't realize how right they are.

Position 2: These are people who claim to be Christians, but see nothing wrong with participating in what they call 'nothing sinister, but some good light-hearted fun.' What I can't understand is why those who claim to live in the light, are willing to participate in celebrating death and darkness. It is my opinion that they are living in a state of dualism - a state of embracing two things that have distinct aspects or parts that are totally opposite. One cannot continually live like this, as it will cause us to become double-minded and insecure about what is truth. It brings confusion and a clouded mind.

Position 3: These are folks who (religious and non-religious) are scared off by Halloween and would rather be locked safely indoors with the lights off, making sure they are enjoying life in as safe an environment as possible. A man by the name of Fischer wrote: "It would be a shame for Christians to be absent from the neighbourhood when this (Halloween) happens." There needs to be a presence of light in an otherwise very dark expression of 'fun.'

How about another position and perhaps a challenge? Romans 12:2 (The Message) says: Don't become so well adjusted to your culture that you fit into it without thinking. Instead, fix your attention on God. You'll be changed from the inside out. Readily recognize what he wants from you, and quickly respond to it. Unlike, the culture around you, always dragging you down to its level of immaturity, God brings the best out of you, develops well-formed maturity in you.

Regent University communications professor Andy Freeman says that Christians should look to Jesus as an example. "He would never have said, 'run and hide, it's Halloween!'"

So here is the challenge for Christians; let us get out into the streets, host a non-Halloween neighbourhood party that celebrates life and light and offer an alternative to the culture of the day. This day is only as evil as we allow it to be.

Personally, i dont celebrate halloween because it's suppposed to be a christian event thats been over taken by monsters and ghosts... Plus, its my sisters birthday and i think trick or treating is begging!

Thank you for your comments. I hope your sister had a wonderful birthday. Continue to celebrate life.

I'd like to be able to remember those who have died without being afraid. To be afraid of death or of dead people as a Christian is to forget that Jesus has overcome death itself. I pray that this All Hallow's Eve we can understand better the wonderful truth that death has lost its sting.

Thanks for your input. We do indeed have the victory over death because of Christ. Let us continue to live victoriously before others who don't know that yet.