Jason Gardner assesses the next evolutionary leap in computer gaming 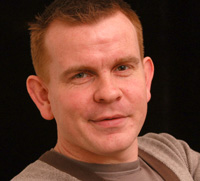 For this particular opinion piece I didn't bother doing a web search for 'top ten mostest awesomest game controllers ever'. Partly because I'm a bit bored of lists and mostly because I already know what numero uno is.

It's the chunky black and orange classic joystick that belonged to the Atari 2600. Essentially it was a black rod stuck on a black box with one red button. But it was oh so much more than that it was - in no particular order - a design classic, an ergonomist's dream, a supreme example of the delicate dance of functionality and beauty.

Perhaps I go too far but my trusty controller and I had many happy hours whittling down the numbers of invading aliens, bouncing balls to knock down walls and guiding spacecraft to pick up stranded astronauts.

Now the software behemoth that is Microsoft have put an end to all that. They've taken the genius of Nintendo's wii and, in a remarkable display of one upmanship, have evolved it. For those of you who have never uttered the immortal line 'I want a wii', Nintendo's latest console represented a break through in computer gaming: unique motion sensor controls that allowed a new level of simple game play and interactivity. No more wrestling with umpteen buttons, all granny had to do was grip the controller like a bat and swing it to make a home run.

Mr Gates and his industrious army, though, have gone one step beyond: exceptional motion sensor control without the need for a controller! It's an ultra clever bit of kit that syncs with the Xbox 360. So now all you need do to steer round a race track at Le Mans is to mime gripping a steering wheel. Want to shoot some pesky aliens? Then your hand simply becomes the handgun. Want to score a goal? Then kick away - just make sure that the Ming dynasty vase is under lock and key.

So clever is the system, that uses a camera, microphones, something called a depth sensor and 3d recognition software, that it can differentiate not just between different voice patterns but different facial features as well. You and the individual members of your family will all be automatically identified.

Scary eh? Remember that scene in the Spielberg Sci fi film Minority Report where Tom Cruise no sooner walks into a shop then cameras recognise him and a sultry female voice starts talking to him about the underpants he bought last time he was in? Well now it could be you walking into the chemist and being told they've got a special offer on that spot cream you bought half a gallon of on your last visit.

Not only that but cameras will probably be able to take your measurements as well. Size 64 plus sir? Step this way.

What, then, does this mean for the future of entertainment? The quick answer is lots. And it's not surprising that monsieur Spielberg was at the launch of the new project, he and George Lucas have long been interested in the potential merger of the movie and game world. We're really not that far from cinemas being replaced by those holo decks off Star Trek -computer generated virtual environments that adapt according to your motion and interact with you. You could be the star of Jurassic Park 19: The lost cause.

And the name of Microsoft's new pride and joy? Natal. That mean's 'from one's birth' (OED) a little bit pretentious perhaps but then they have produced the next generation of entertainment. Trouble is when it comes to entertainment we're like kids at Christmas: we're already bored with the present we've just opened, what's next? When there's no depth of appreciation for what we have now we end up craving novelty in the hope it'll satisfy.

Does that mean in the not too distant future I'll get tired of coming home and turning my living room into arctic tundra, the Himalayas, the Queen Vic, Battlestar Galactica or Buckingham Palace? No doubt I can always look forward to the next generation of tech: chips in the eyeballs or brain that mean my whole world can turn into the 'reality' of my choice.

So it's the end of an era, something is born and something dies. And here am I getting misty eyed over that little tangible connection between me and my on screen heroes that was the game controller. If you want to mourn with me you'll find me at www.deadjoysticksociety.org

The opinions expressed in this article are not necessarily those held by Cross Rhythms. Any expressed views were accurate at the time of publishing but may or may not reflect the views of the individuals concerned at a later date.
About Jason Gardner

Jason Gardner is currently employed under the auspicious title of âYouth Project Researcherâ at the London Institute for Contemporary Culture. The main aim of his work is to seek to analyse the social phenomena that is youth culture and why its existence has led to distancing between young and old, inside and outside of the Church.

As well as teaching on this subject for the LICC he also lectures on Film, and Contemporary Music; helps run a sex and relationships course for young people along with His wife Rachel entitled âRomance Academyâ; is a regular contributor to Youthwork magazine and presents school conferences for the Damaris trust. Jason has also been a voluntary youth worker most of his adult life for secular and Christian youth groups.

View all articles by Jason Gardner