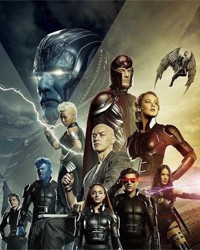 Many critics have been deeply unfair to Bryan Singer's X-Men: Apocalypse, and I can't quite figure out why. True, it's hardly groundbreaking. Nor is it as good as the recent Captain America: Civil War. But it is light years ahead of Batman v Superman: Dawn of Justice. Furthermore, despite an overstuffed plot, it does feel like a satisfying superhero movie, delivering the requisite thrills, laughs and even occasional moments of pathos.

The plot is a bit involved; suffice to say it begins with a Stargate style prologue, with a false god aka super-powerful mutant called Apocalypse entombed in ancient Egypt. Thousands of years later, in 1983, Apocalypse is dug up by an over-enthusiastic cult, and all hell breaks lose. Various mutants side with him, including Magneto, whilst Charles Xavier and other mutants new and old try to fight him.

Themes of overcoming false deities, discovering potential and finding the good within oneself are positively explored. As expected the visual effects are excellent, Singer directs with flair, and John Ottman builds on his signature X-Men score to good effect. The final part of the film is certainly more predictable, with the story degenerating into the usual destruction porn, but despite such inevitabilities, I really can't understand why some critics claimed this film was terrible. It absolutely is not; despite a neat, knowing joke about "the third one is always the worst" after certain characters take a visit to the cinema to see Return of the Jedi. The third film in this series, X-Men: The Last Stand (not directed by Singer), is certainly the worst.

As it stands, X-Men: Apocalypse doesn't top X-Men 2, or X-Men: First Class as the top films in the series, but it is certainly on a par with the last outing, Days of Future Past, and well worth a watch.