Men And Women As Sons Of God 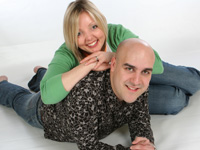 One of the most fundamental and life-changing revelations we could ever have is that we are a son of God; a son of the creator of the universe, the Alpha and the Omega, the Beginning and the End, the King of Kings and Lord of Lords, need we say more?

When the Bible says 'sons' it means both men and women; in the Hebrew culture, the son was the one that received the father's inheritance. It's therefore a blessing that girls can be known as sons! But what does it mean to walk through life as a son of God? Firstly, to be a son you need to know your Father. Knowing that we are created in the exact image of our Father and created for His good purpose is the first stage of sonship with God. Knowing this is so important that the enemy spends most of his time trying to hold us in bondage to the way we see ourselves and to what the world tells us.

God showed His heart and purpose for us right back in the Garden of Eden. Here, he dwelt in unity, face to face with man and mankind subdued the earth and had dominion over it. That is still His purpose today (to be entirely fulfilled at the second coming). Yet when man was thrown out of the garden because of sin and disobedience there became a separation from God. In each of us there is a deep wound which has been caused by this separation from God and often from some type of broken relationship with our earthly fathers. Father God wants to heal that wound in us, show us His heart and His purpose for our lives.

From that understanding and knowing our position as a son of God, our lives can do three simple things:

As sons of God, our first priority is to reflect the Father. Just as the moon has no light of its own but reflects the light of the sun - so can we reflect God's light. This requires intimacy with Jesus at all times. Sometimes being a Christian seems complicated, sometimes it feels simple, but plainly reflecting God is Jesus' plan for every Christian.

Have you ever been caught in a situation with your friends who are not Christians - tempted to do something that you would never do if your Christian friends were around? A son of God represents his Father wherever He is - not just on a Sunday morning or Friday night at youth group. What about internet use? - there may be no-one around you, but you are still representing the Father by what you are looking at. It's very easy to live a double life with our attitudes and behaviour but when you realise you are here on earth to represent God, you'll want to be true to Him, wherever you are.

If you reflect and represent something you will ultimately replicate that in those you influence. For example, Dan's dad supported Arsenal Football Club growing up and used to talk about them a lot. He took Dan to see an Arsenal game when he was a wee nipper and guess what? - He's an Arsenal fan! This may be a silly example (although Arsenal is by far the best football team in the world) but it is the same in our Christian walk. There is a saying that goes "we can say what we like with our lips, but we impart who we are".

Ask: What do I impart? What do I leave with other people? Is it God stuff? A way to measure this is by looking at your friends and family and those that you spend time with - are you reproducing the Father into their lives? Every word sows a seed, every action a consequence.

Our encouragement to you today is to seek the Fathers heart, let Him show you He is your Father and then work that out in every area of your life so you reflect the Father; you represent Him always and what you reproduce are sons of the Kingdom.

The opinions expressed in this article are not necessarily those held by Cross Rhythms. Any expressed views were accurate at the time of publishing but may or may not reflect the views of the individuals concerned at a later date.
Dan & Claire Maudhub
Pastors
Jubilee Church
Maidstone
www.jubileeonline.org.uk


View all Life Files by Dan & Claire Maudhub
Sign up now to receive weekly Life Files, direct to your inbox.