Open Our Eyes And Let Us See! 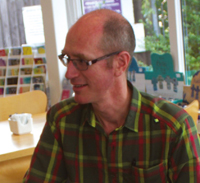 Our perspective is the way we see and understand things, our mental view or outlook...
Here is a great story from the Bible that shows things are not always what they seem. May we see some things from a new perspective.

The story tells us that "The king of Aram was at war with Israel, he would confer with his officers and say, "We will mobilise our forces at such and such a place."

The king of Aram became very upset. He asked "who is the traitor? Who has been informing the king of Israel of my plans?"

His officers replied. "Elisha, the prophet in Israel, tells the king of Israel even the words you speak in the privacy of your bedroom!"

The king commanded, "find out where Elisha is, and we will send troops to seize him."
...one night the king of Aram sent a great army with many chariots and horses to surround the city. When Elisha's servant got up early the next morning and went outside, there were troops, horses, and chariots everywhere.

"Don't be afraid!" Elisha told him. "For there are more on our side than on theirs!" Then Elisha prayed, "O LORD, open his eyes and let him see!" The LORD opened his servant's eyes, and when he looked up, he saw that the hillside around Elisha was filled with horses and chariots of fire."

The greatest temptation for us always seems to be to give up!

I was recently recounting my sorrows to a man I met at a conference. In response he asked me, "well, do you expect it to be easy?"

Answer...well I wished it was! But in my heart I know that anything that is worth anything carries a cost, it needs investment! How often do we feel we are failing, that we will never arrive, that everything is against us?

Honestly, in my relationships I find myself sometimes wanting to give up. In my ministry it can sometimes seem too hard, perhaps I should move on... even in my Christian faith I have faced questions, obstacles and times of uncertainty, and I have had to make the choice to go on.

Perhaps it seems to you that there is an army camped out around you. You're surrounded and there's no way you can escape. The army could be anything from fears and doubts - to lack and debt - to relationship breakdown and a broken heart.

My prayer is O LORD, open OUR eyes and let us see! Give us YOUR perspective!
Whatever the situation, don't be afraid, there are more on our side than on theirs!

thank the lord for opening my eyes to your article.
it's blessing.