Adrian: I knew that night that the Rotterdam concert, for me, was the most powerful - especially vocally. I remember, after the event, saying to Dave Bainbridge, "When you get the tapes, please prioritise the Rotterdam concert." Just to give you an appendage to this conversation, I cannot tell you how much problem we had getting the tapes to the Rotterdam concert. The first two had recorded fine; the third one, there had been some problems. When the guy that recorded them sent them to Dave Bainbridge, the Rotterdam one wasn't there. He was then asked to mail it special delivery on a hard-disk, and about two weeks later it hadn't arrived. He absolutely insisted, "I sent it." The company that were due to get it to its destination said they had delivered it, and they hadn't. By now we were really panicking. We asked him to send it again, but this time to my address, and it never arrived.

I confess - and the guy in question knows this, because I've apologised - I had got to the point where I could not help but think, 'Is this guy not telling us the truth? Has he messed up that third recording and cannot bear to tell us?' So I began to doubt that it existed. The final bit of the picture was that he agreed to put it on a hard-disk and give it to my personal assistant, who is Dutch; she was coming out to meet me in Switzerland. Until she handed it over to me, I wasn't convinced. I went back to England, I got it special-delivered to Dave Bainbridge, and the next day he said, "It's all there." I met this guy in Holland not so long ago and I said, "I am so sorry that I doubted you. I was getting so concerned and confused." It's a very long story, but yes, it was largely based on the Rotterdam concert. We had much better sound in Veenendaal, so some of the instruments were taken from that, but most of the vocals were taken from the third of the three. 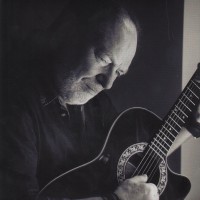 Adrian: With a work like this, the last thing you want is to be waking up in a morning thinking, 'The most important recording is never going to see the light of day; and the person that did it is not telling us the truth.' It was horrible. So, you're right, there was a little bit of an attack on one's hope and emotions.

Tony: How did you feel the Dutch choir compared with the All Souls choir on the original album?

Adrian: There were actually two choirs. There was a core choir - 16 singers who were indeed considered to be strong vocalists. They were close-miked. What you had, in the concerts, was a pretty solid and strong series of voices - 16 mics were involved in recording. The mass choir - depending on the night, another 50, 60 people - were miked overhead. So you've got this lovely dynamic of the big choir coming in for the big pieces. That's why we achieved the song we did; and Dave Bainbridge's work in the studio, on corrections. I spoke about disappointments with the first album. I remember feeling that the choir sound on the album was a bit too Anglican, middle-class English. I hate using those phrases, but when we started touring that work, and I was working with German and Norwegian choirs - 'City Of Peace' was recorded with the Reflex Choir. What they and gospel music have in common is this extraordinary ability to match vocal sounds: they sing as one, they flow as one. Often, in an Anglican choir, you can hear too many individual voices to give you that orchestral unity.

It was very early on, therefore, in the touring of 'Alpha & Omega' that I knew we were getting better choir sounds live than we ever did on album. That is a very significant reason for re-recording. The choral sounds and the vocal sounds in general were, for me, absolutely at the front of the reason for redoing it. You know the album - when you come to some of the more poignant or triumphant pieces, you have to have this sound of many voices singing so powerfully and so beautifully that they take you over. That's what, for me, to an extent, was missing from the original album.

Tony: Was Phil Thomson, the lyricist who worked with you on the original 'Alpha & Omega', involved with the new album?

Adrian: Not in any part of the recording. We repeated the concerts almost exactly a year after the live recordings, so there was a year in between the recordings and all the studio work, then finally, last September, we launched the album with two concerts and a special launch event. Phil came to those. We were out of touch for an awful long time until this recent coming back together.

Tony: He must have been blown away by the new recordings.

Adrian: He was virtually speechless. It was very special to sit there with him after the concert and see that he just didn't know how to put into words what he'd heard. I said at the launch party - and Phil was there, and listening to me tell the story - I said, "If there's one lyric in the world that I would've given anything to have been the author of, it is the lyric Phil wrote called 'Guns Of Peace'." I just think that is utterly inspired. There is never a time I sing that when I am not close to tears. After hundreds of times of singing it, those words are so powerful they just go straight to my heart. I think they are some of the best poetry, the best lyric, of its ilk, that I know; and I am privileged that it belongs to my music.

Tony: In the age of the internet, you'll be selling as many downloads of the new album as physical copies. Are you ready for that?

Adrian: We're already in that place: through iTunes and Amazon it's selling more than the CD. We can't keep our head in the sand and say we're not going to do it that way, but with every new technology the sacrifice is in the more creative aspect to the way that you package something. Because you know my stuff, you'll know the care that I used to take back in the day. Gatefolds, booklets, original drawings - everything was thought through because I wanted somebody sitting there with this beautiful work of art as they listen to the album.

Tony: This is why you need to think about a vinyl release.