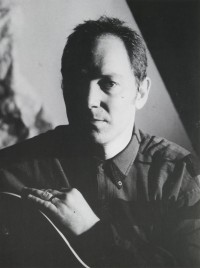 For much of the '80s and '90s, singer/songwriter Adrian Snell was Britain's best selling Christian musician. His debut album 'Fireflake' (1975) established him as a major Christian music artist while classic albums like 'The Passion' (1980), 'Alpha And Omega' (1986) and 'Beautiful. . .Or What?' (1993) showed a consummate artist able to take big themes, and with an eclectic mix of pop, rock and orchestral elements, make music that touched Christians at a deep level. In recent years, Adrian's UK profile has been rather low (Adrian does 80 per cent of his concerts and touring in countries other than the UK), but with a new Kingsway album 'Intimate Strangers' putting him back in the CD racks, this seemed a good moment to quiz the veteran composer, pianist and singer about his music.

Tell us a little about the two volumes of 'City Of Peace'.
"I suppose, in a way, I see 'City Of Peace' as the next chapter in the story that began with 'Alpha And Omega' then 'Song Of An Exile'. It is a deep and personal exploration of the Jewish roots of my Christian faith, drawing on poems and biblical texts written by Jewish authors over more than 6000 years. As I often say in concerts, as I've made this journey to the heart of Israel, I've seen in many, many ways how the story of this remarkable nation mirrors my own journey of faith. The Jewish people know all about triumphs and disasters, great hope and utter despair, doubts and certainties....and so do I. Indeed I find it profoundly moving and challenging that the very name God gave to this nation, ISRAEL, means 'he who struggles with God'. How very appropriate a name - and the struggle continues, as does mine...but with a God who loves his children and is totally faithful in times of failure as well as success."

What's the vision behind the 'Intimate Strangers' album?
"I'm not sure I'd use the word vision exactly! These are very personal - intimate songs, many of them written over quite a long period of time, and awaiting the right moment for album recording. I suppose the simplest description is a collection of love songs. But like most songs about love, it's not quite that simple! On 'Intimate Strangers' there are songs about the discovery of love, longing for love, lost love, lost childhood, and the longing for innocence... Oh so many things! I guess the secret is really in the title. It seems to me that you could put the words 'Intimate' and 'Strangers' together and apply them to pretty well all the relationships that matter most in our lives: everything from lovers, to parent and child, to the relationship with God. "Nothing ever stands still in a relationship, changes are coming all the time - sometimes deeply rewarding and about growing closer, and sometimes the reverse, and everything in between. I happen to think there's something for everyone in this album - we're all there in the picture somewhere. The other important dimension to Intimate Strangers' is my desire to explore new ideas musically, new sounds, a different approach to my singing. I worked closely with producer Jon Birch on this album, and together we've pushed the boat out somewhat, stylistically. I really needed that - I hate the idea of sticking to a formula - even if it's been relatively successful. Music is so much the language of my heart and I'm exploring new sounds in my listening all the time. So it's very important to me that I'm experimenting, opening new territory in my own writing and recording too."

Down the years you've been well known for the BIG project like The Passion' and 'Alpha And Omega'. Have we seen the last of the Adrian Snell concept works?
"Not at all! Actually, as I answer these questions, I'm working on the last stages of a very long term, ambitious and special work that's been in development for three years now. It's called The Cry: A Requiem For The Lost Child'. Sometime I'm sure we'll talk about this in much more depth, but for now let me tell you that this work will bring the authentic words of children in conflict, from the Holocaust to former Yugoslavia, within the structure of the 'Requiem'. A work that 'remembers for the future', that asks very difficult questions of us and God, but offers a 'vision' of the world as Jesus will shape it.... The music is performed by artists as diverse as the Winchester Cathedral Choir (probably the best Cathedral choir in the world!), to me and Natasja Gorlee as soloists, Wellspring Ensemble (strings), Nick Beggs (Chapman stick), Dan Wheeler (guitars) and the production and programming skills of Jon Birch again! The album release is a long way off, but I really believe this will be a very special, unique work that says just what I believe needs to be said at this time in history."

Kingsway are about to release an Adrian Snell 'Best Of album. Looking back through the years, what would you say have been the three most significant songs and why?
"That's really not a fair question! Keep in mind that this Kingsway release is five albums on three CDs - an awful lot of songs! So many of them carry very special memories - remind me of the circumstances in which they were written. My music, in the end, is my 'testimony', and whilst of course there are songs/pieces that embarrass me, I know now more than ever the importance of each piece as an expression of who I was, what I was thinking or feeling at that time. I am saddened by writers/performers who dismiss or reject out of hand work they produced in their early, formative years. In a way it's a denial of the 'real' person they were at that time. We should be glad, even feel privileged that we have this unusual document to our growth as people. I suppose, in a way, it's like being embarrassed over photographs taken of us in another period of our lives. However we try to say 'this is not me' or 1 can't bear to see myself looking like that' or 'how could you possibly have allowed me to wear those clothes...?!', in the end it IS me/you - the way we were at that time, and sometimes we can't cope with this stark, one-dimensional vision of the child that has become the person we are now."

Christian music is still evolving. As a pioneer of the scene, what are your thoughts about groups like Delirious? and dc Talk?
"To be honest, I have never really kept much in touch with what we refer to as 'Christian music'. Perhaps that's a subject for another interview, too, one day! I listen to what inspires me -the music that moves, challenges and excites me. My tastes are very, very diverse - from Rachmanninoff to Massive Attack! Right now I'm listening to artists and bands as wide ranging as Everything But The Girl, Talvin Singh, Peter Gabriel, Achinoam Nini, Bach, Billie Holiday, Sting...and, well, so much else in this wonderful, diverse world of music that's available to us like never before."