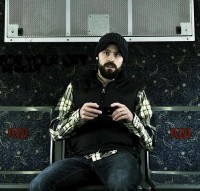 Cross Rhythms radio is one of the few radio stations, Christian or non-Christian, which auditions for airplay every album it receives which fall into its format (ie, youth orientated contemporary music made by believers). This policy means that we're regularly playing tracks by independent artists whose music deserves the widest possible exposure. And so it came to pass that a download album 'Eyes Like Fire' released in 2011 by Ohio's Alan C Duncan & Foster finally found its way onto Cross Rhythms' reviewing and auditioning shelves. It turned out to be a gem. Cross Rhythms reviewer Gareth Hills wrote, "In an age where much of the mainstream['s hip-hop] seems obsessed with sex and material gain, artists like Alan C Duncan remind us of just what the genre is capable of conveying, and this short set is a stellar example of what can be done when a talented rhyme-smith and inventive producer collaborate with the aim of imparting something significant."

One track particularly, the intriguingly enigmatic "Departure", stood out. At the time of writing that stunningly original track has receive 230 plays on Cross Rhythms' three radio stations. Tracking down Alan, we began by asking for his response to "Departure"'s radio exposure. "I'm quite surprised by that! 'Departure' almost didn't even make the album. We recorded about 15 songs but only nine ended up making the album. We wanted to make sure 'Eyes Like Fire' was a cohesive work so we cut anything that didn't quite fit. 'Departure' was almost cut for that reason but our friend Tom said he liked it. He says it's actually his favourite song on the album. Foster and I were so close to the album that a bit of outside perspective really helped. I didn't think the song was 'radio friendly' but I guess our buddy Tom has a great ear. 'Departure' is the most intentionally opaque song in my catalogue. It opens (and closes) with shadowy dialogue from a film noir classic and doesn't get any more clear as it progresses. I usually tell one narrative or focus on one topic when I write but 'Departure' has a few small narrative thoughts. It's stitched together by quotes from my father and other little turns of phrase. It may sound unrelated upon first listen but it's made cohesive by the refrain. There's really no traditional chorus, and that makes its radio play all the more surprising. In 'Departure' I essentially let go and rapped about things that were on my mind. I wanted to create a song that required repeat listens to get all the details."

Alan was asked about the identity of Foster. The rapper explained, "Foster is actually my younger brother Evan. Quite out of the blue (at least from my perspective) he started to make hip-hop beats. They kept getting better and I kept getting inspired to write to them. He chose the name Foster because it's a family name on my mother's side. The chemistry Foster and I have when it comes to making music stands out to me. He knows the types of beats that fit my voice and style. That's the mark of a great producer. For example, when I heard the beat that would become 'That Vibe (So Live)' I wrote to it almost instantly. The completed song basically fell out of me in one sitting. When Foster heard what I had done over his beat he was equally as excited. That makes it fun."

Alan was born "an '80s baby" in Jacksonville, Florida where his father worked for The Fellowship of Christian Athletes. At the age of two the Duncan family moved to Memphis, Tennessee so that his father could attend seminary. "Finally we moved to Cleveland, Ohio when I was five and I began living the life of a pastor's kid. I can honestly say I had (and still have) two loving parents and two great younger brothers. My parents taught me about Christ from an early age. I have a young son myself, and my wife and I have been singing hymns to him since he was in the womb. I know my parents did the same with me. Children who grow up in that environment often learn to love and respect Christ's teachings very early on. That being said, it can be hard for kids in a Christian household to notice a huge life change that often marks the conversion to Christ. I did however understand the importance of knowing Jesus personally and probably prayed the 'sinners prayer' dozens of times as a young kid. I always wanted to make sure I REALLY meant it. I did make a decision for Christ at age 13 and was baptized shortly after that. I often site that moment as my conversion experience but lately, I've been looking back on those early prayers as a kid. I think Christ heard those. Sometimes I think I met Christ as a young child and the experience at age 13 was more of a recommitment. I can say this for sure. The conviction of the Holy Spirit and a passion for God's truth has followed me since my youth. I love the Lord because he first loved me and I have placed my trust in Jesus alone for my salvation."

From his childhood Alan was immersed in music. "My mother would put melodies to Bible verses and sing them to me as a young child. My mother was also instrumental in introducing me to the music of The Beatles. She actually saw them live when they came to New Orleans in 1964. Paul McCartney even kissed her hand! So I've always had an interest in music. I heard an urban gospel Christmas album when I was about 14 years old and fell in love with a rapper who was on 'Hark The Herald Angels Sing'. At that point I began to write spoken word, poetry-type raps with no music. Eventually I met my friend who goes by the rap name God's Child. He mentored me in hip-hop culture."

Alan laughed when Cross Rhythms suggested that the name Alan C Duncan sounds more like a Scottish folk singer than a rapper. So why didn't he adopt a more hip-hop sounding stage name? He admitted, "For a while I performed local shows under the moniker Fisherman. Then I had the opportunity to perform at my University in front of a huge portion of the student body. Many in the audience were my friends and people who actually knew me. But they didn't know me as Fisherman. When it came time to perform it seemed a little ridiculous to suddenly be introduced as something other than Alan. It didn't feel authentic. I made the decision at that point to use my real name and added the middle initial for a bit of flair."

In 2008 Alan made his first recording 'Fisherman'. "That one started it all for me. The general theme of the album was taken from Matthew 4:19. I used graduation money to fund it and my future wife Joanna sang on two songs. We hit it off in the studio and my engineer Eddie Tomecko predicted we would marry! The song 'Abba' is a personal favorite and seems to have the most impact."

Two years later the 'Fresh Air' album was released. Commented Alan. "I feel like I made drastic improvements on this project. People I respect musically started to take notice and I felt like I was on the right track. 'A Conversation' from 'Fresh Air' is some of my favourite writing I've done because I was actually scared to write it. I knew I had to walk a fine line when creating that song. Evan (Foster) also made the first of his many music videos for me for the title track." 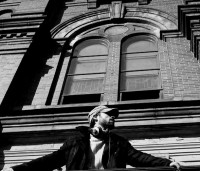 Also released in 2010 was 'Dreamer: The Fresh Air Mixtape'. "I first rapped over a couple of Foster's beats for this project. I also rapped over some quirky instrumentals like film scores and acoustic music. This one was great fun to make. 'Alone (A Morning Song)' is a personal favourite from this project."

Now Alan and Foster are hard at work recording a new album, 'That Blue'. Said Alan, "Again, this one will be generally inspired by our life growing up. I'm very excited about it. I'm also working on additional solo songs for a future album. I really do want to thank Cross Rhythms for supporting independent music and giving artists like me and Foster a chance to be heard."

Like the majority of independent artists, Alan isn't make a living form his music. He said, "I'm currently working for a Christian non-profit company called The American Policy Roundtable. I edit their weekly radio program called The Public Square. It's been educational for me to learn about walking out godly principles in public policy. I'm also still attending and serving at the same church my father founded 26 years ago. Overall, I'm really enjoying being a husband and father. My son Ethan was born Christmas Day of 2010. That night as I held him and stared at his face I felt God speaking to me in his 'still small voice'. I felt intense love for this child I had only just laid eyes on hours earlier. He had done absolutely nothing to earn my love but he had it. And he'd always have it. I felt God tell me in that moment, 'That's how I feel about you.' It's an experience I wish everyone could have. We can love because he first loved us. We don't have to put pressure on ourselves to earn God's love. We need to accept it."